Letters of credit, like bills of exchange that were drawn in, but payable outside the United States, were taxed at the rate of four cents per $100, or fraction thereof. At the turn of the 19th the currency of choice for most world travelers was the British pound, so while this letter of credit was drafted at the National Bank of Commerce in St. Louis, it is for drafts against The Union Bank of London in the amount of 200 Pounds Sterling.

The first two pages of this quatro were engraved by the American Bank Note company and feature delicate scroll-work with the bank's name interwoven throughout as a security measure. The last two pages list the worldwide corresponding banks where drafts against the letter of credit may be drafted. 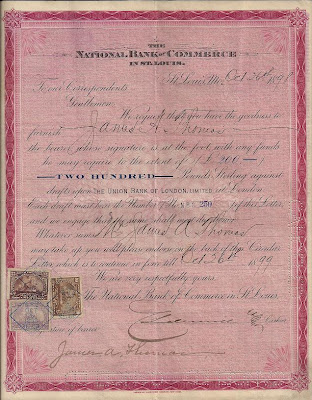 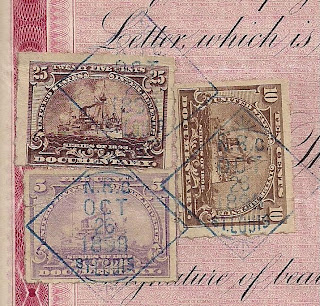 Detail of Stamps and the Bank's Dated N.B.C. St. Louis Cancel
The letter was good for one year and James A. Thomas used it only once. At the Chartered Bank of Hong Kong, on April 4, 1899, he secured 100 pounds. Presumably upon return to St. Louis he turned it in to the Commerce Bank where it was cancelled with a perforation reading "CANCELED" along the right front edge and bottom.

Detail of April 4, 1899 Endorsement of the
Chartered Bank of Hong Kong
According to a handwitten note at the bottom of the second page of the list of corresponding banks, "In all cities marked thus (red plus sign) + drafts will also be cashed by Messrs. Thos. Cook & Son." 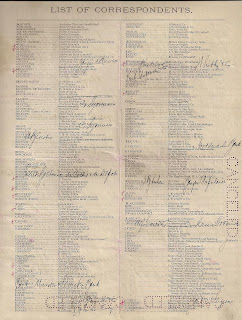 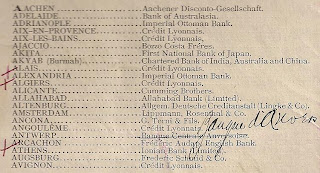 
This is the only Letter of Credit bearing 1898 revenues that I've ever seen. If anyone has other examples we would like to show them too on the 1898 Revenue Blog.
Posted by Frank Sente at 12:01 AM