The tax on bonds was defined in the very first paragraph of the War Revenue Law Schedule A Documentary Stamp Taxes. Specifically, bonds, debentures, or certificates of indebtedness issued by any association, company, or corporation were taxed at the rate of 5-cents per each $100 of face value, or fraction thereof.

That initial Schedule A paragraph goes on to define taxes on both the initial sale, and on any resale, of stock certificates (we'll cover those taxes in subsequent posts). But there is no mention about any tax on the resale of bonds.

I'm not a student of financial history and there simply may not have been a resale market for bonds at this time. But it always has seemed odd to me that the law specifically taxed both the sale and resale of stock certificates, while only taxing the initial sale of bonds. We'd welcome comment from anyone who could share additional information or insight about the investment bond market circa 1900, and why only the initial sale of bonds was taxed.

I've found only scant information about the Patchogue Ice Manufacturing and Cold Storage Company whose $100 bond appears below. The company, according to its seal, was incorporated in 1898 and apparently was created via this $15,000 (later raised to $20,000) ten-year bond offering.

Only the first three annual interest coupons have been clipped on the several examples I've seen suggesting the company either was sold or closed in 1902. Can anyone offer further information about the disposition of the company and the fate of its founding investors?

It does clearly illustrate the basic 5-cent per $100 rate with a single five cent battleship documentary affixed next to the corporate seal, properly cancelled with the initials of its secretary and date of 12-28-98. 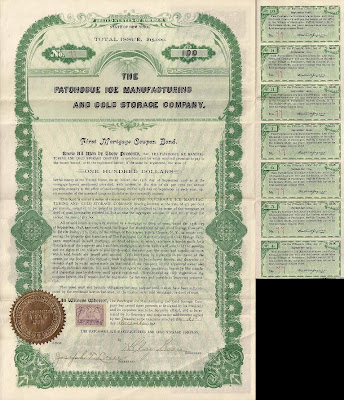 Although it exhibits ornate scrollwork, the bond is not engraved, but appears instead to simply have been litho-printed on a generic stock form devoid of any defining vignettes. It nonetheless was nicely designed with the type having been set specifically to accomodate the placement of the corporate seal and the necessary tax stamp; a nice touch not found on some of the more elaborate, engraved bonds we'll show in future posts. 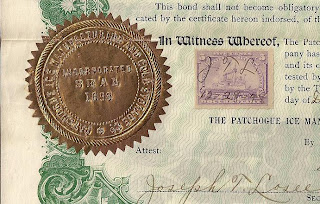 Detail showing seal and cancelled stamp with the
signature of Secretary, Joseph T. Losee, below

Closeup showing one of the attached annual interest coupons