A post with a bit more detail on this railroad can be found here.  By early 1901 the KC,FS&MRy would become a part of the St. Louis & San Francisco, known as The Frisco, though by late 1901 Gould interests would predominate.  There is no evidence to date that The Frisco used printed cancels, while Gould railroads clearly did.

From the historical information at the back of the Fullerton Catalog:  Originated as an independent line of the Missouri River, Fort Scott & Gulf, which was originally the Kansas & Neosho Valley RR.  The evolution is a bit hazy but a consolidation of the KCFS & Springfield and the KC, Springfield & Memphis occured April 23, 1888.  The KCFS&S was formed by a consolidation of  KCFS&Gulf RR, Rich Hill RR, Southeastern & Memphis RR, KC&Missouri RR, Short Creek & Joplin RR, and the Memphis, Kansas & Colorado Ry on February 8, 1888, in the state of Kansas.  In 1917 all 920 miles wre controlled and operated by the St. Louis-San Francisco Ry.

Perhaps the most important historical information on this railroad for the printed cancel collector is the fact that the Memphis Route was controlled by the Goulds late in the history of the 1898 tax period.  As many (perhaps all?) Gould railroads used printed cancels, this would explain the Memphis Route's use of the cancel only later in the tax period:  the railroad appears to have only used the cancels on hyphen-holed stamps.

GOULDS GET ANOTHER ROAD.
---------
Report that the Kansas City, Fort Scott and Memphis Has Changed Hands.

KANSAS CITY, Mo., Dec. 21.--A report is current here that George Gould, working with Nathaniel Thayer, has secured the controlling stock in the Kansas City, Fort Scott and Memphis Railroad, and that the Memphis system will be taken out of the hands of the St. Louis and San Francisco, which has operated it for the the past several months, and will be made an independent property, in which the Gould interests predominate.
According to this report, Thayer, who has long been one of the principal stockholders on the Memphis system, was dissatisfied with the operation of the property by the "Frisco", believing that the latter road had taken Memphis route equipment for use on Frisco lines, leaving lines of the Memphis system unprovided for and had otherwise used the Memphis property for the benefit of the Frisco.
It is said that Mr. Thayer and Mr. Gould conferred with the result that Thayer agreed if Gould would buy enough Memphis stock to give his own and the interests represented by Thayer control, that the property would be turned over to Gould management, and that this plan has been followed out.

Only one type on two denominations: 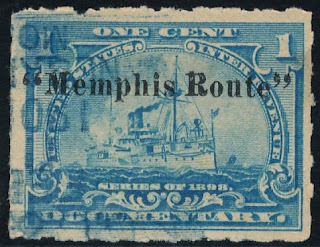 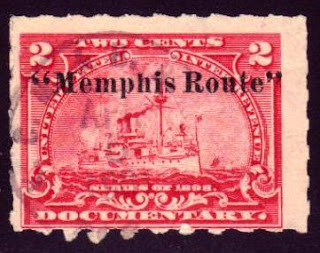 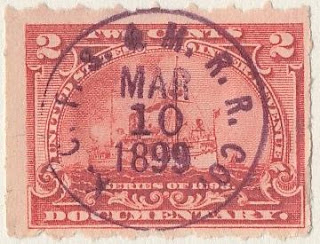 "Memphis Route" handstamp on 2ct roulette
Handstamps are generally not listed in the Fullerton catalog.  This cancel is provided for reference. 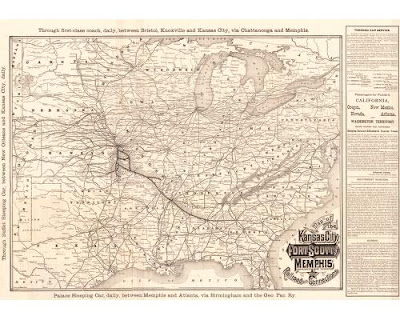