Richard Fullerton documented two street railroad companies in Michigan that used printed cancels.  The examples of these cancels are rare if not unique, and the style of the cancels are exactly the same and likely produced by the same printer even though the railroads were located in two distant cities:  Saginaw and Detroit.

Saginaw and Detroit.  These cities are also something of a mystery.  There were Union Street Railways in multiple cities in the United States at the time of these cancels.  And there is only passing evidence that I've found so far of a Detroit and Wyandotte company.  Fullerton provides no history of these railways in his manual, and only provides the cities as an identifying location for the railways.  Are these the right cities for these railways?  And is Detroit and Wyandotte the proper name for the cancel initials?  Any proof that anybody might have to confirm these identities would be helpful.  For now I will go with these locations and names, but I would like to know Mr. Fullerton's sources and proof. 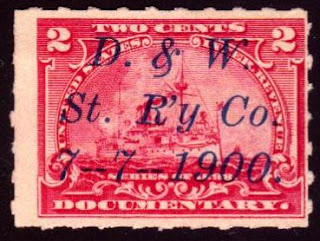 Type 1, 2ct a.(2)
Richard Friedberg scan
Richard notes that this example may be unique

Street railways had been a way of life in East Saginaw and Saginaw City since 1863. At that time the cars were pulled by horses and traveled over strap rails with wooden stringers. "Little Jake" Seligman, who owned the old East Saginaw City Street Railway, created a corporation which he called the Union Street Railway. In 1889 "Little Jake" converted his street cars to electric power. The city council drafted new ordinances and licensed the new electric railway. In the fall of 1890, the Bartlett Illuminating Company signed a contract to provide power for the new venture. As sparks flew from the rails, some residents refused to ride the "fire spitting devil." In 1895 the antiquated Saginaw City Street Railway sold its property and franchise because it couldn't afford to convert to the new electric cars. In 1900 the Saginaw-Bay City Railway Company was formed by the consolidation of the Saginaw Valley Traction Company and the Bay City Traction and Electric Company.  from Riverside Park & Saginaw Valley Traction Company, by Anna Mae Maday, Manager, Eddy Historical & Genealogy Collection of Hoyt Public Library in Saginaw, Michigan, September 2000. 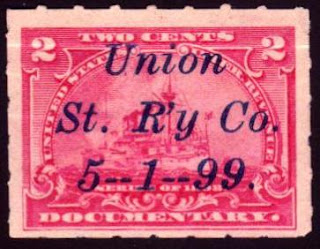 Type 1, 2ct a.(1)
Richard Friedberg scan
Richard notes that this example may be unique
Previous posts have discussed other street railways that did not use printed cancels:
The Brockton, Bridgewater & Taunton Street Railway
The Philadelphia City Passenger Railway
California Street Cable Railroad
At the time of these cancels, street railroads were common in urban centers in the United States.  By the middle of the 20th century most of these urban railroads would cease to exist, replaced by buses and cars.  However, there remain a few famous urban railways that have never shut down.  The cable cars of San Francisco are the most famous.  In my hometown of New Orleans, the streetcars remain an important tourist attraction and mode of public transport.  My home as a kid was located three blocks from the end of the St. Charles Avenue streetcar line, and my school, Isidore Newman (the alma mater of Payton and Eli Manning!), was located two blocks off the line.  I made regular use of the old streetcars to get to school, even though the technology for the cars was nearly a century old.
Posted by John Langlois at 12:01 AM