Using primary source material and contemporary reports from the New York Times, Michael Mahler has meticulously researched the history of New York State's confusing early 20th century property tax laws. And in doing so he has unclouded the mysteries surrounding the usage, between 1911 and 1920, of the New York State Mortgage Endorsement, Secured Debt, and Tax on Investments stamps.

Until Mahler's definitive works about these stamps most collectors, myself included, had scant knowledge about them and little understanding of how they were used. I feel fortunate, over the years, just to have acquired a number of bonds bearing stamps from both the 1898-1902 Spanish American War federal tax era and New York's 1911-1920 personal property tax era.

So just how did it come to pass that some mortgage bonds taxed during the Spanish American War era also have NY State property tax stamps affixed? The story is too long and involved to tell here, so I invite readers to read Mike Mahler's four articles about them on the American Revenue Association's website. It's a fascinating story and Mahler tells it with clarity and profuse illustrations.

Let's look at the bonds that show the 1898 federal stamps and the earliest of New York's stamps, the Mortgage Endorsement issues. Mahler’s census of usage of the New York Mortgage Endorsement stamps on mortgage bonds total about 700 including some anecdotal usages. Of those only three bonds are also known with a 50-cent 1898 Battleship stamp.

I’m pleased to show all three combo usages below. For the specific article about usages of the Mortgage Endorsement issues shown in this blog, go here. 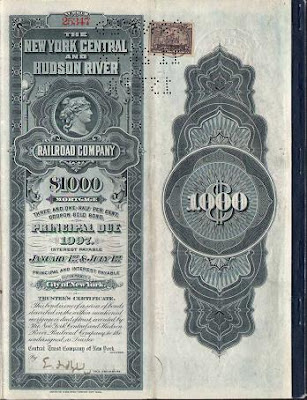 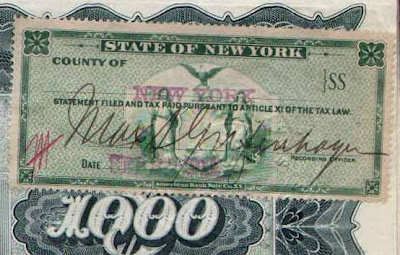 I only showed scan details for the bond above as the full face is exactly the same as the bond below, also from the 1897 New York Central and Hudson River Railroad Company bond offering. This one features the later orange NY State Mortgage Endorsement stamp that replaced the green issue in 1915. It also benefits from having both stamps on its face.

It was originally sold on September 15, 1898, about 5 months prior the the example above and in this instance the R171 50-cent Battleship revenue was affixed and cancelled by the Trustee for the bond offering, the Central Trust Company of New York. Apparently by February 1899, when the bond shown previously was sold, the NYC & HRR company itself was handling sales. 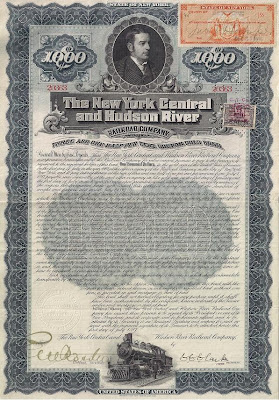 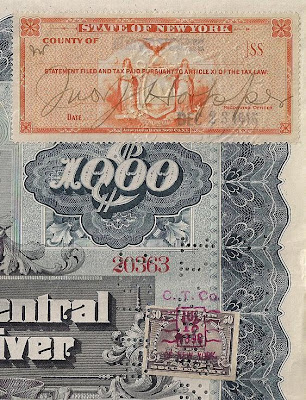 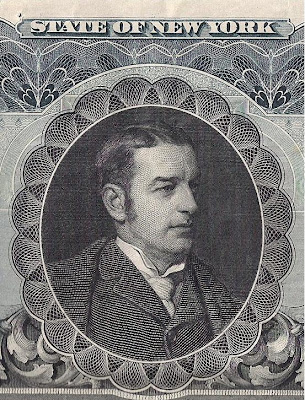 Vignette of Cornelius Vanderbilt II, President of NYC&HR
who died September 12, 1898, three days prior to the issuance of this bond 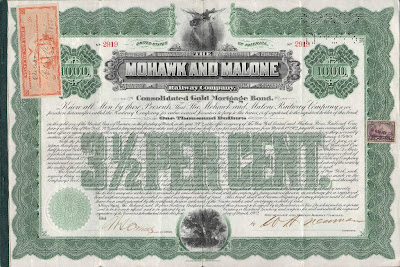 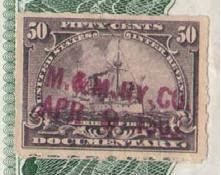 The orange New York State Mortgage Endorsement stamp on the Mohawk and Malone bond was cancelled May 26, 1919 in Oneida County, NY.