From the historical information at the back of the Fullerton Catalog:  This road is a consolidation of the Platte County, the Atchison & St. Joseph, the Weston & Atchison, the Missouri Valley, the St. Joseph & Council Bluffs, and the Council Bluffs and St. Joseph railroad companies.  The Platte County was chartered February 24, 1853 and was consolidated with the first three above listed lines as the Missouri Valley RR on March 6, 1867.  This line and the remaining lines above were consolidated under the new name as above on July 11, 1870.  Consolidated into the CB&Q (RR020) in 1880.

Fullerton lists two types, on only the 1ct denomination: 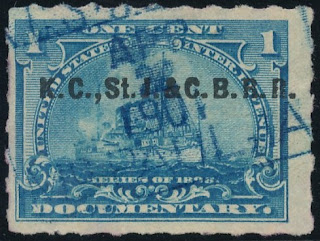 No image for type 2

From the historical information at the back of the Fullerton Catalog:  A reorganization on July 1, 1875 of the Mississippi Valley and the Western RR opened under the new name as above on September 11, 1879.  The Keokuk & Northwestern was nominally leased but practically owned by this line which has itself been controlled by the CB&Q (RR020) since 1884.

Fullerton lists two types on cancel on only the 1ct denomination: 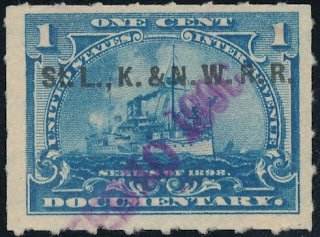 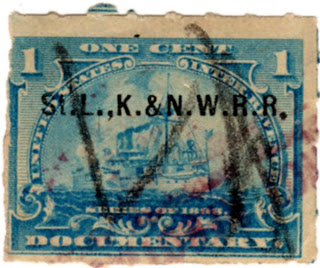 Type 2, as. (1)
roulette, initials 22mm across, variety with diamond shaped period after second R
Lesher scan
Posted by John Langlois at 12:01 AM