Cancel for October 1: The Bank of Baraboo 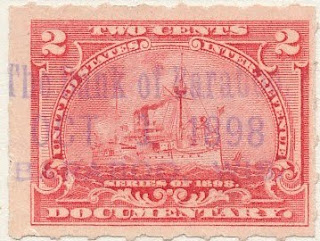 The Bank of Baraboo
OCT    1    1898
BARABOO  WISC
Senator Herbert Kohl of Wisconsin placed these remarks in the Congressional Record on June 11, 2007 regarding The Bank of Baraboo:
Mr. President, I would like to take the time to recognize and honor Baraboo National Bank located in Baraboo, WI. This year, the bank celebrates 150 years as Baraboo's first and oldest bank.
On July 15, 1857, Simeon Mills joined with Terrell Thomas to open Sauk County Bank, Wisconsin's 15th chartered bank, in a building just down the street from its present location. They began with $50,000 in operating capital and by the end of that year were well on their way to establishing a successful institution. By the early 1860s, the Sauk County Bank had grown their operating capital to break the $100,000 mark. A fire in their first location caused the bank to move into temporary quarters on the back of a lot purchased on the corner of Oak and Third Avenue. The new building would soon be built on this corner and stand until today.

In 1873 the charter for Sauk County Bank changed and the bank renamed as First National Bank of Baraboo. For a 7-year period after the bank changed its name, banks in Wisconsin were financially stressed and many were closing across the State. However, through the actions taken by the principle officers and stockholders, the bank was able to avoid disaster. Otto Ringling came to the First National Bank of Baraboo and deposited a large sum of money to show his support for the bank. To show their appreciation, the bank would often send the Ringlings money when they needed help.

The 1880s brought more prosperity to Sauk County and the bank grew well beyond its neighboring competitors to over $400,000 in assets. By this time the bank decided it was time for a name change. In doing so, was now called The Bank of Baraboo, which would remain for about 58 years. Baraboo was now the 25th largest city in the State. Industry and small businesses all over the county were helped by the bank to get their start.

In 1938 a final national bank charter changed the name from The Bank of Baraboo to The Baraboo National Bank. As banking products expanded, the bank was now able to provide more services to the community. They even had a minibank at the local Badger Army Ammunition Plan. The Baraboo National Bank continued to expand the building on the corner, taking in space to the south and to the west.

Today with assets nearing the $800,000,000 mark and a market share in Baraboo averaging 66 percent, The Baraboo National Bank has a lot to be thankful for. Customer loyalty going back for several generations and local businesses enjoying growth are what the bank is really all about. 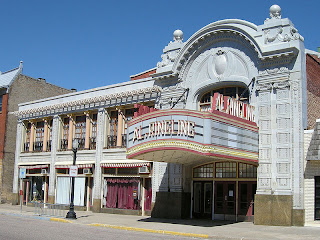 Al Ringling Theater in Baraboo Wisconsin
Posted by John Langlois at 1:00 AM