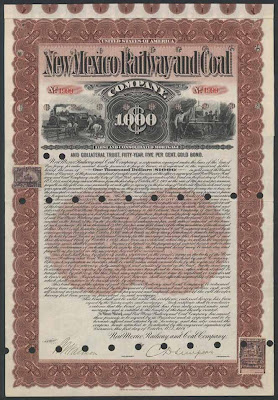 The New York State Mortgage Endorsement tax stamps shown in a previous blog applied only to bonds secured by a mortgage of properly located wholly or partly with the State of New York.

Bouyed by the success of that tax, New York widened the scope of its exemptive tax program in 1911 by offering State residents the same permanent exemption from the annual personal property tax for all mortgage bonds provided they pay a one-time Secured Debt tax of 0.5%; later increased to 0.75%

The full story is not that simple. The details of this on-again, off-again Secured Debt tax show how the State of New York struggled to find an equitable solution that would provide a revenue stream for the state's coffers, yet be accepted by the majority of its residents. As with the Mortgage Endorsement tax, Michael Mahler has done a masterful job of spelling the fascinating story behind the Secured Debt tax within its historical context while at the same time providing profuse illustations of bonds demonstating how the tax was paid. Mahler's Secured Debt tax article is available on the ARA website.

Unlike the generic Mortgage Endorsement stamps, a series of denominated stamps was issued for the Secured Debt tax, thus showing exactly how much tax had been paid on each bond. More than 100 bonds bearing the Secured Debt tax stamps are known, but only one is known in combination with a Battleship stamp from the 1898-1902 Spanish American War tax era. As illustrated above, a $1000 New Mexico Railway and Coal Company bond originally issued on October 1, 1901 and then properly taxed 50-cents with an R171 Battleship stamp, also bears a $7.50 Secured Debt tax stamp properly paying the 0.75% state tax in effect when it was applied on September 21, 1898.

Thanks Michael for sharing this unique usage!
Posted by Frank Sente at 12:01 AM