This is a continuation of a series of posts about Ocean Passage tickets.

To date we've viewed a ticket from Philadelphia to Bremen via the American Line S/S Pennland; a ticket sent to us by JW Palmer for a trip from Jacksonville, FL to Nassau, Bahamas via the Florida East Coast Steamship Co. steamer Lincoln; and a ticket from New York to Bremen via the North German Lloyd Steamship Company steamer Luitpold, one of four tickets sent to us by Bob Patetta.

Two of Bob's four tickets, like JW Palmer's submission, are from the Florida East Coast Steamship Company. In fact they are both datelined: NY Dec 22/99, exactly like Palmer's ticket! 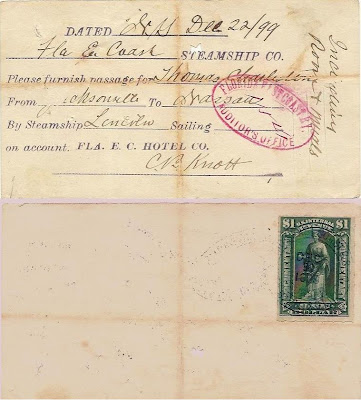 Front and Back of
Florida East Coast Steamship Company
Ocean Passenger Ticket
Jacksonville, Florida to Nassau, Bahamas
"Including Room and Meals"
Patetta's tickets are nearly identical so we only are showing the one for Thomas Charleston. The other ticket was for Miss Agnes Munroe, who along with Miss Lizzie Johnston (Palmer's ticket) must have been traveling together with Mr. Charleston.
Bob tells me that he purchased these two tickets separately from different sources and Palmer's ticket came from a third source, so who knows how long they have been separated. It's nice to unite the three again, but that begs the question of how many others might have been on this NewYear's gambol to the Bahamas, and how many other tickets may still survive in philatelic hands? 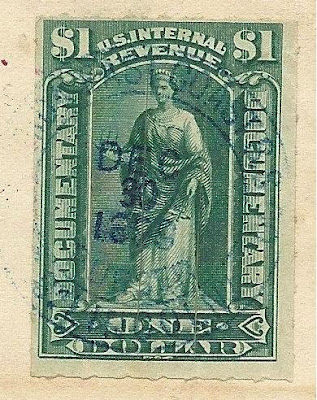 Double Ring cds
FLORIDA EAST COAST R.R. Co.
DEC/30/1899/BURSAR
*S. LINCOLN*
We're still looking for more ocean passage tickets, especially showing the higher tax rates of $3 and $5. If you have one please send a scan and details to 1898revenues@gmail.com
Posted by Frank Sente at 12:01 AM