Bills of lading and any other documents, such as manifests or express receipts, evidencing the shipment of goods were taxed a flat one cent according to the War Revenue Law. Neither the weight of, nor the quantity of items shipped mattered. As indicated by the Illinois Central Railroad Freight Contract illustrated below various items all sent to the same destination were considered as a single shipment. Essentially the 1-cent tax was levied on the shipping document, not the contents of the shipment.

The handwriting has faded, but clearly 1 box, 3 bundles, and 3 sacks, or a total of 6 items were shipped from Paducah, Kentucky to Bearden, Arkansas. As per the endosement in the lower left corner the shipment was routed via Memphis where it then had to be transferred to the Cottonbelt Railroad(St. Louis Southwestern Railway) for eventual delivery in Bearden. The transfer to another rail line was not subject to tax; the initial bill of lading, and the 1-cent tax thereon, covered the shipment from its origin in Paducah to its final destination in Bearden. 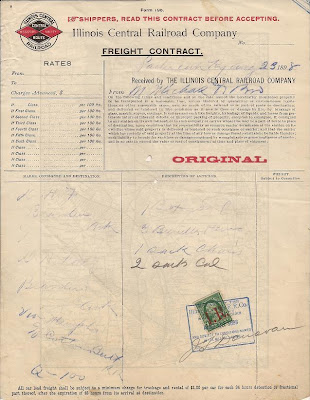 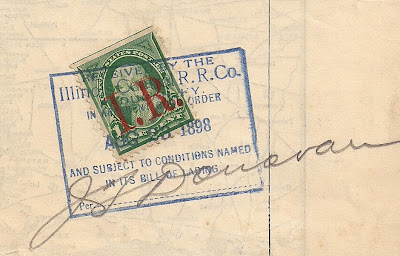 RECEIVED BY THE
Illinois Central R. R. Co.
PADUCAH, KY.
IN APPARENT GOOD ORDER
AUG 23 1898
AND SUBJECT TO CONDITIONS NAMED
IN ITS BILL OF LADING.
Per (signed by J.F. Donovan)

Both John and I have blogged about the ICRR before. On July 8 it was the subject of the cancel of the day. On August 3, 2010 I wrote about the tax on an ICRR Parlor Car ticket. We both found the same ICRR route map online to then include in those blogs. Today's map comes from the back of the bill of lading. I had completely forgotten it was pictured there! 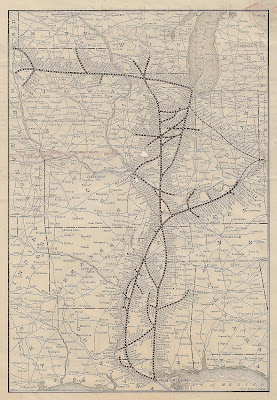 Route Map Illinois Central Railroad circa 1898
Posted by Frank Sente at 12:01 AM