The Fullerton List: Railroad 100, The Sioux City and Pacific Railroad

The SC&PRR operated within the states of Iowa and Nebraska, and was built to connect Sioux City to the Union Pacific at Fremont, Nebraska.  As stated above, the line became a part of the Chicago and North Western in 1880s.  It is now a main line of the Union Pacific.  The "Blair Subdivison" of what is now the Unions Pacific was part of the old SC&PRR line and was also once part of the FE&MVRR.
Fullerton lists two types, on only the 1ct denomination.  An unlisted and no year date cancel is included below: 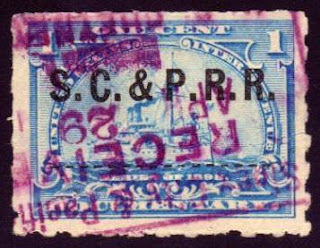