When I started blogging about bonds a few days ago, I emailed Bob Patetta, who has contributed some great documents before, asking if he had any unusual bonds.

Am I glad I asked! It turns out Bob has a spectacular bond, ex Morton Dean Joyce, written for Three Hundred and Fifteen Thousand, Two Hundred and Eighteen Pounds, Fourteen Shilling Sterling. That converts to $1,525,658.50 with the tax at 5 cents per $100 in face value, or fraction thereof, being $762.85 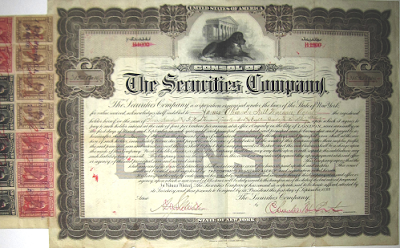 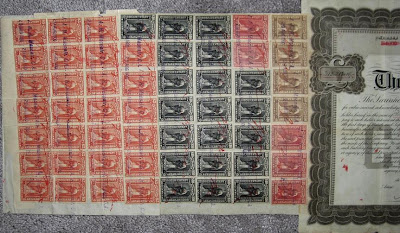 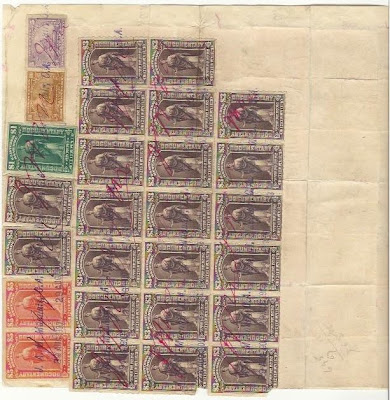 back of attachment sheet showing the balance of the tax stamps
Bob Patetta scan
I'm guessing this Securities Company bond was a type of investment vehicle where the assets of various investors were pooled to create a super bond. Considering the official British Government bonds of the period generally paid just 2 3/4% annual interest, the 4% offered through this bond must have looked attractive to its investors. Anyone who can shed further light on how this investment likely was structured is invited to Comment below, or email 1898revenues@gmail.com
The stamps are all cancelled with a single-line hand stamp reading, J. A. H. Macnair, C. A. , the company's named agent, and a separate single-line date stamp dated, 29 AUG 1900. There is no indication other than the lined out signatures that the bond was called, but the fact that it was not taxed until 2 days prior to September 1, 1900, one of the interest due days when the principal also could have been paid off, suggests that's what occurred thus forcing Macnair to pony up the tax nearly a year after it should have been paid.
It's hard to find on-document usages of the $3 and $30 Commerce issues. To find both on the same document is a real coup! And it's likewise hard to find on-document usages of the 80-cent Battleship.
Thanks Bob for sharing this spectacular bond. If anyone else has an unusual bond with unusual taxation, please send a scan and description to 1898revenues@gmail.com
Posted by Frank Sente at 12:01 AM