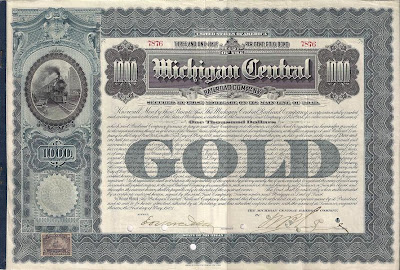 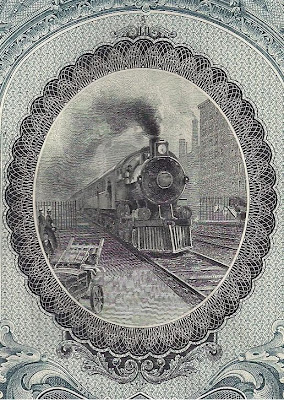 Long term railroad bonds appear to have been a popular investment at the turn of the 19th century. The security of a first mortgage on the company's tangible property must have added to their popularity as opposed to less secure investments in stocks. The Michigan Central mortgaged the best part of its 270 mile route from Detroit, Michigan to Kensington, Illinois along with its terminal properties and any future acquisitions for this 50-year 3 1/2% coupon bond.

It was beautifully engraved by the American Bank Note Company, with ornate green borders and scrollwork. Looking closely at the vignette of the steam locomotive at left one can make out a set of golf clubs lying on the luggage gurney in the foreground. Someone was headed for a golfing vacation.

The MCRR was incorporated in 1846 to acquire the line the State of Michigan had built from Detroit to Kalamazoo. It extended the line over the years, but also ran afoul of the State of Michigan who pulled its charter in 1900 over a dispute involving allegedly delinquent taxes. The State allowed it to reincorporate in 1901 and issue this bond offering in May 1902. The influx of cash allowed the company to expand operations and to take over some other lines. For details of MCRR operations as of 1912, go here.

The 5-cent per $100 tax was paid with a single 50-cent battleship cancelled with a light blue circular datestamp of the M.C.R.R. Co. The stamp was further defaced with a three line cut-cancellation. This is late in the tax period; the tax on bonds and all other documentary taxes were repealed as of June 30, 1902. 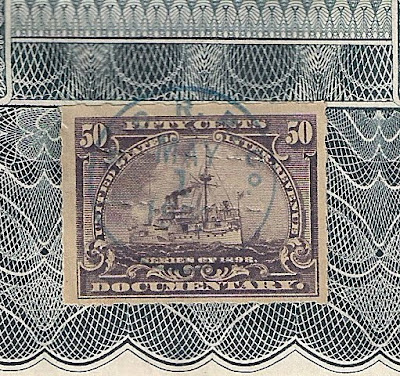