This is the final installment of a three-part post about the usage of Battleship revenues in combination with the New York State Mortgage Endorsement, Secured Debt, and Tax on Investment stamps of 1911-1920.
We've covered the Mortgage Endorsement and Secured Debt usages previously. Today we'll look at two Cleveland, Cincinnati, Chicago, & St. Louis (aka The Big Four) Railway bonds taxed during the final, Tax on Investment, phase of New York State's tax on mortgage bonds.

Again, for more details about how all of these three New York State stamp issues were used, I invite readers to Michael Mahler's series of articles on the American Revenue Association's website. The specific article about the Tax on Investment stamps may be found here. 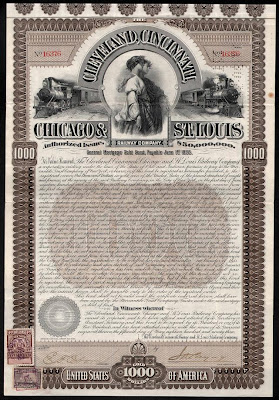 The $1,000 bond above was originally issued June 1, 1900 during the Spanish American War tax era and was then properly taxed 50-cents (5-cents per $100 in value or fraction thereof) with an R171 50-cent Battleship revenue. The $4 Tax on Investment stamp, paying New York State's 20-cent per $100 per year mortgage bond tax for two years was added June 12, 1918 when the bond was registered with the Comptroller's office. This is the only bond currently known showing a joint usage of a Battleship revenue with a New York State Tax on Investment stamp. 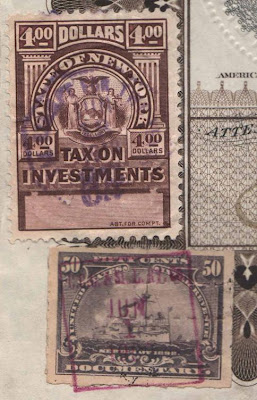 It was originally issued on November 1, 1899 and then properly taxed 50-cents with an R171 Battleship revenue. On September 18, 1917 when the owner decided to register it with the State of New York and pay the then current Tax on Investment fee of $10 for five years, a $10 Secured Debt stamp from the 1911 issue was used to pay the fee. 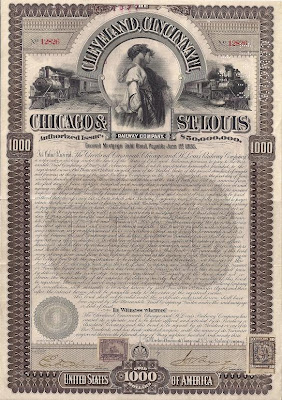