On Beyond Holcombe: Andrew Jergens Company

Editor's Note: Malcolm A. Goldstein is a contributing blogger for 1898 Revenues. This post is part of a continuing column on the companies that used proprietary battleships. 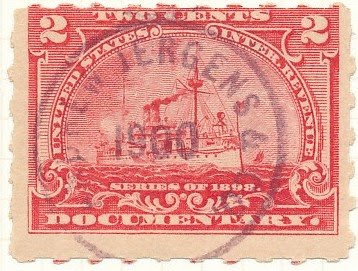 Andrew Jergens & Company first appeared on this site in August, 2009.

Andrew Jergens Company was among a group of soap making companies that originated in Cincinnati, Ohio. Its long and storied history, which expands to include lotions, perfumes and other beauty care products began around 1882.  Philatelically, Jergens reached its zenith not during the Spanish-American War, when it merely applied hand cancels to the battleship revenue issue, but rather during World War I when it printed its cancel on the subsequent black proprietary revenue issue of 1914 to 1916, RB32 to RB64. While not entirely accurate, the corporate history does verify the surge in revenue usage during World War I. 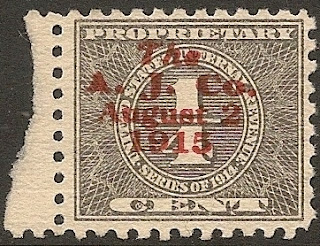 Andrew N. Jergens, Sr. was born in 1852 in Schleswig, a southern province of Denmark invaded and incorporated into Prussia in 1864. However, before Schleswig changed hands, Andrew had emigrated with his family to Indiana in 1859. At twenty, he moved to Cincinnati, and, as with all creation myths, the story of the founding of his company is told in slightly different ways in different accounts. It is said that he and a man named Charles H. Geilfus, variously described as a fellow common laborer, neighbor or older soap maker, joined, either to reorganize Geilfus’s existing business in 1880 (or with one W.L. Haworth), to form a new partnership in 1882, one (or both) of which then became known as the Jergens Soap Company. Jergens apparently supplied the $5,000 capital necessary to finally get the operation launched, so the company bore his name. Whatever the romance behind this tale, focusing on Jergens’ singular bravado in investing his entire life savings, according to the Cincinnati street directories (now available on line), Geilfus was a soap maker in 1880, and the Western Soap Company (not the Jergens Soap Company) came into being in 1882. 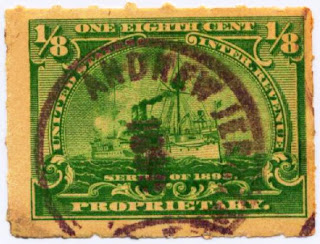 In 1886, the Andrews Soap Co is listed in place of the Western Soap Co. According to the company’s website, by 1894, Jergens had brought his brothers, Al and Herman, into the company and it became known as the Andrew Jergens Company. The city directories do acknowledge the name change as of 1895. Geilfus, whatever his role in the company formation, was born in 1856 and lived until 1914. Geilfus, during his long tenure as a corporate officer, and Haworth, if at all, for an infinitely shorter microsecond, apparently subordinated their personalities to Jergens, and have left virtually no independent record of their existence behind them. The soap making company located its plant, with its one soap making boiler and twenty-five employees, in the slaughterhouse and meat-packing district of town to be able to obtain most of their needed raw materials easily from meat production waste. The one extra ingredient Jergens and his partners chose to add to usual soap mixture was coconut oil. The Andrews Soap Co sold coconut oil soap.

In 1901 the company, now definitely the Andrew Jergens Company, incorporated, with Andrew, brother Herman and Geilfus as its corporate officers. These three men inhabited lavish homes on three corners of the same intersection in the Northside neighborhood of Cincinnati known locally as “Millionaires’ Corner.” Jergens Park, a city park, now occupies the site of Jergens’ house, and one of its rooms, imported from Syria is preserved in the Cincinnati Art Museum as the “Damascus Room.” 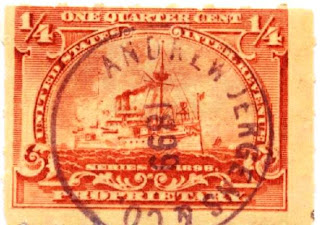 The official company history indicates from 1898 to 1901, during the period when Jergens used the battleship revenue stamps, it continued to market coconut soap as its principal product. In 1901, this history continues, it evolved, in a single bound, from a soap company into a cosmetics company when it purchased the product lines and trademarks of the John H. Woodbury Company, makers, among other things, of Woodbury facial soaps, and the Robert Eastman Company, a perfume and lotion manufacturer. These purchases ignited the explosive growth of Jergens in the first decade of the 1900s from 25 employees to 1000 employees (and, indirectly, stimulated its need to use a printed cancel, rather than a hand stamp, on the black World War I revenue issue). 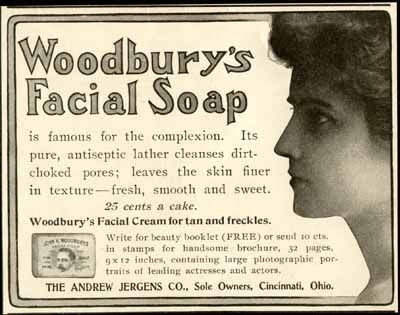 The contemporary record blurs the drama of the company’s single moment of transition. In the February 10, 1897 issue of a weekly drug trade publication, one short paragraph announced that the company had purchased the factory of the Eastman Perfume Company of Philadelphia and had taken control of the manufacture and sale of the Woodbury facial soap and cream, while leaving Dr. John Woodbury still in control of his Dermatological Institute located in New York. Beyond that news, the same concise blurb remarked that Andrew Jergens was on an extended trip to Mexico, and would attend to the necessary arrangements to effectuate these changes upon his return. The magazine speculated that the principal change would be an expansion of the company’s sales force. Thus, although the Woodbury purchase was finalized in 1901, the transition had already begun in 1897 under licensing agreements. While this account is less vivid than the company history - and is probably historically insignificant - this small correction of the historical record is attested mutely by the absence of battleship revenue cancels for either the Eastman or Woodbury companies.

No matter what the actual succession of events, the new products did change the nature of the Jergens company’s business. The hand cream formula bought from Eastman was marketed originally as “Jergens Benzoin and Almond Lotion Compound,” and later simply as “Jergens Lotion.” It proved to be an instant success and rocketed Jergens to the top of the newly emerging field of skin care products. Expanding upon the model of the varied line of Woodbury soaps, by 1911, Jergens was marketing 82 brands of fragranced soaps, mostly under the Jergens name. But the Woodbury soaps were proving as troublesome as they were profitable. Around 1906, Dr. John Woodbury claimed that Jergens had breached the 1901 purchase agreement by not following the prescribed medicinal formula for his Woodbury soaps, marketing cheap tallow soap as “Woodbury Soap” instead. Woodbury marketed his original formula under his own name as a “Woodbury’s New Skin Soap.” Jergens was forced to sue Woodbury for an injunction to bar him from marketing soap under his own name, since Jergens owned the rights to the Woodbury name under the 1901 agreement. By then, Jergens had brought the J. Walter Thompson agency in to create a new advertising campaign to market the Woodbury soaps, leading ultimately to the wildly popular slogan “A Skin You Love To Touch” (modified in the 1920s to “The Skin You Love To Touch”). While it is difficult to measure why this campaign produced such an iconic slogan and remained effective as a branding tool for so long, some observers have suggested the slogan’s success was rooted in its being the first subtle injection of sex into advertising. After litigation in a variety of courts as intricate and protracted as Dickens’ Jarndyce v. Jarndyce, in 1921, Woodbury’s cousin, William, ultimately extricated, by means of a tiny sliver of trademark rights held back in the original 1901 contract of sale, the right to produce a line of products under his own name, but not John’s. Further litigation between the company and William Woodbury circumscribed even that right in 1927, and as late as 1938, the various Woodbury interests were still suing each other over who owned what residual rights to the Woodbury name under the 1901 contract. 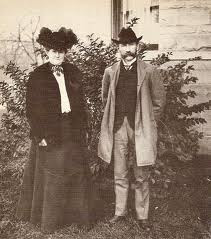 
Andrew Jergens, always portrayed as hard working and frugal, remained at the head of his company until his death in January, 1929. His son Andrew N. Jr., born in 1881, succeeded him as president. Junior apparently was not terribly close to his driven father, but, nevertheless, as a dutiful son, started at the bottom of the company and worked his way up. When radio developed as an advertising medium in the 1920s, Senior endorsed the medium by diverting a portion of his advertising budget into radio advertising. Under Junior, the company sponsored Bing Crosby and Bob Hope in the 1930s, Walter Winchell, the most-listened-to and influential radio political columnist of his day, from 1932 to 1948, and Louella Parsons, his counterpart as a Hollywood gossip columnist between 1944 and 1954.

The company also innovated in the areas of using movie star endorsements and pioneered in marketing cosmetics in chain stores rather than beauty specialty shops. Along with strong advertising, the company produced new and more daring products, such as roll on deodorants and bubble bath, so that it was solid and established in the beauty care field when Junior died in 1967. American Brands, Inc. purchased the company in 1970, and a Japanese company, the Kao Corporation, purchased it from American Brands in 1988. As a wholly owned subsidiary of Kao, Andrew Jergens Company purchased the John Frieda Professional Hair Care Products business in 2002. While the company name was officially changed from Andrew Jergens to Kao Brands in 2004, the Andrew Jergens Company is still listed on the web as having a street address and telephone number in Cincinnati and new Jergens products are readily available on the web.