Quite often I get hits on this blog from people looking for information about an old battleship revenue stamp.  One of the most common searches is for price information on the 1/8 cent battleship revenue.  While its quirky face value of 1/8 cent leads many to think the stamp must be rare and valuable, huge numbers were printed and used.  As a consequence single used copies of this stamp are common and cheap.  Even unused singles are similarly inexpensive.

However, there are certain presentations of this stamp that do have some value to collectors; even some cancelled versions of this stamp can sell for more than $10.  But you have to know what to look for.   I will present examples of some of these more valuable cancelled or used stamps in a post in the next few days, but first a review of the basics.

The 1/8 cent proprietary was used to pay taxes on so-called "proprietary articles."  At the time these stamps were printed there were many items of alleged medicinal value that were sold under branded, or proprietary, names.  Any article 5 cents or less was taxed at a rate of 1/8 cent, and there were many products sold at 5 cents or less.  Proprietary products generally consisted of medicines of some kind, with names like Mrs. Winslow's Soothing Syrup.  The bottle of syrup or the box that surrounded the product would have the stamp attached, and the stamp would be cancelled with the name or initials of the company or product and the date of the cancel.  Certain cancels are valued by collectors, and command a premium over others.

For now, the basic stamp and some explanation of its value in unused and more common used conditions: 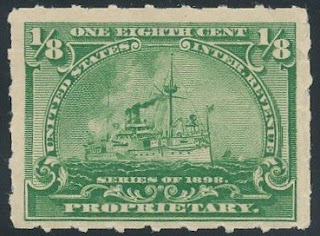 Regular used versions of the stamp above and immediately below are priced at 25 cents by Scott.  When Scott prices a stamp at 25 cents it essentially has no value; the price is set at 25 cents so that a dealer has an incentive to stock and sell the stamp. 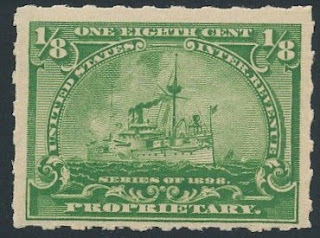 Note the dramatic difference in value between the following two 1/8 cent stamp multiples.  The block of 4 below is worth little, and priced only at 75 cents by Scott.  But the plate number block of 6 below is another matter, and is priced at more than $100.00.  Collectors today collect this type of plate number material while at the time these stamps were issued plate blocks were rarely preserved.  So while the 1/8 cent battleship revenue is generally a cheap stamp, the 1/8 cent plate block is scarce and thus relatively expensive. 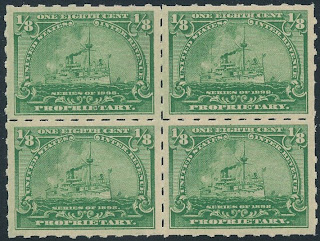 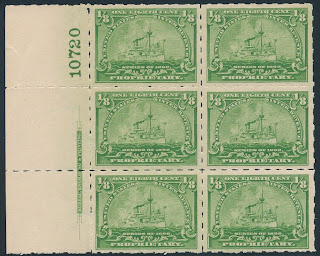 In a post in the next couple of days I will highlight copies of this stamp in used condtion that due to their special cancels command a premium price from collectors.

Posted by John Langlois at 9:00 PM