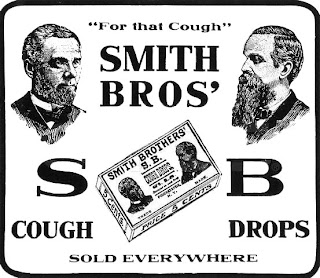 The complete check
You can still buy Smith Brothers Cough Drops by visiting the website for The Victory Old Time Candy Store. 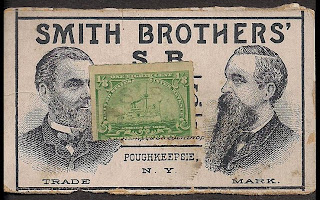 RB20 1/8ct proprietary attached to Smith Brothers packaging.
Sente scan
From the current Wikipedia entry for Smith Brothers:
William Wallace Smith I (1830-1913) and Andrew Smith (1836-1895) were the sons of James Smith (c1800-1866) of Poughkeepsie, New York. James' family had emigrated from Fife, Scotland, in 1831, and James had emigrated from St. Armand, Quebec in 1847. In New York, he opened a small restaurant, ice-cream parlor, and candy business, called "James Smith and Son". James Smith bought a cough drop recipe from a peddler named Sly Hawkins. In 1852, James developed lozenges and advertised them in the Poughkeepsie paper selling them to those "afflicted with hoarseness, cough or colds". William and Andrew inherited the business after their father died in 1866. The brand was then named "Smith Brothers Cough Drop". In 1872, to prevent drug stores from selling generic lozenges, they developed one of the first factory filled packages with trademark branding. On the packaging the word "Trade" appeared under the picture of William and the word "Mark" under that of Andrew, they were then incorrectly referred to as Trade Smith and Mark Smith. Andrew died in 1895, and William continued as president of the company almost up to his death in 1913. William was succeeded by his son, Arthur G. Smith (c1875-1936), who continued to expand the company by adding menthol drops (1922), cough syrup (1926) and wild cherry drops (1948). Arthur G. Smith had two sons: William Wallace Smith II (1888-1955) and Robert Lansing Smith (1891-1962). The trust funds that owned Smith Brothers stock in 1963 merged their company with Warner-Lambert. The last Smith Brothers Cough Drop manufactured in Poughkeepsie was made in 1972. They were thereafter manufactured by F & F Foods in Chicago, Illinois.
Posted by John Langlois at 12:01 AM