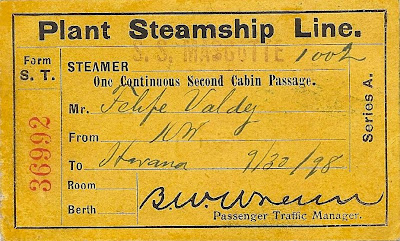 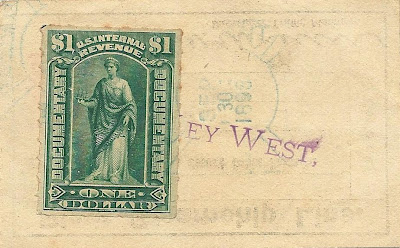 Reverse side of ticket
R173, $1 Commerce Documentary
tied by an illegible cancel dated SEP/30/1898
Bob Patetta scan
Actually Henry Plant's development of rail lines into Tampa as well as his docks there lead the US Army to choose Tampa as an embarkation point for the invasion of Cuba by the Cuban Expeditionary Force in late June 1898. Cuba was in American hands in a matter of weeks and presumably it didn't take long for the Plant Steamship Company to resume regular service to Cuba.
Thanks go to Bob Patetta for providing this ticket and several others that we've included in our series of blogs on ocean passage tickets.