While there was an 1898 series of beer stamps, the stamps and the taxes they paid were not for the purpose of supporting the war effort, as they accounted to more general revenues for the US Treasury.  However, the Bureau of Engraving and printing was producing both the ongoing series of beer stamps while printing the battleship and other associated war stamps.  In their hurry to produce the new stamps and the ongoing series, they occasionally made a mistake.  This post presents an interesting example of one of those errors.
Frank Sente has supplied a block of the 1/8 cent proprietary that has non-inked vignettes of the REA60 beer stamp visible in the margin.  As a reminder, REA60 looks like this, with an image of Thomas Hart Benson in the center: 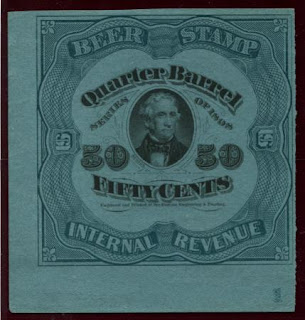 Below is a bottom right margin imprint and plate number 9437 block of twenty of RB20 wherein you can faintly see two vignette impressions of the REA60 federal beer stamp in the margin.

A cropped image from the block showing the BEP margin imprint and the lower of the two REA vignette image: 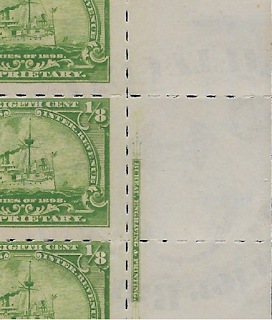 Frank ran the cropped image through a program called RetroReveal to "strenghten" the image of the REA60 vignette.    The vignette is inverted.  At the top you can read ..."rter Barr".. of Quarter Barrel above the recognizable image of Thomas Hart Benson's head with "Fifty Cents" below that. 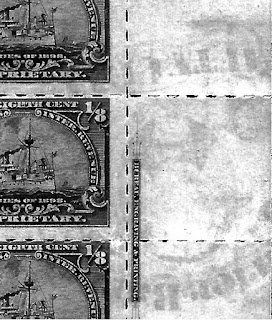 Thanks to Frank for sharing this.  If there is this one, there must be others.  Examine your battleships closely!

Back after a month -- been a bit busy with another project.  Lots of material has come in that is worth working through and posting, so we'll see how the next few weeks go.  Today's entry is from David Thompson, who has shared a pair of R187s with a cancel from The General Manifold Company:

FRANKLIN,  PA.
THE GENERAL MANIFOLD COMPANY,
O.  D.  BLEAKLEY,  Treas'r.
APR  23  1901                        APR 23  1901
When I first saw this cancel I assumed that the company was involved in the manufacture of engine manifolds.  Seemed like a muscular and needed business during the age of steel and railroads back at the turn of the century.  Turns out that the business produced a form of carbon paper that would allow businesses to make ready copies of its documents.  In particular, the company produced carbon paper products for railroads, and there are feature articles in various railroad publications from the time on the company and its product.  Their business was big enough that they built a large plant in Franklin, Pennsylvania to produce their office supplies: 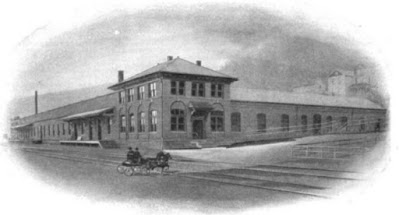 The General Manifold Company plant, Franklin, PA
A brief description of the company's activity can be found in the 1904 edition of Railway and Locomotive Engineering: 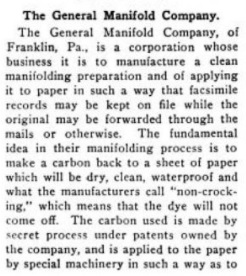