Starting on the two-cent X designs, RN X6 is fairly simple. There are many different shades of the two-cent imprints, but only three are listed, two under X6: yellow and pale olive. 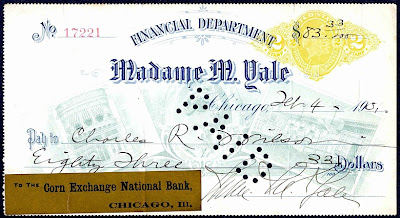 Unlike the Civil War imprints, some X’s do appear to be pure yellow. Which ones may depend on the eye of the beholder. To me, the imprint on this ornate check is a good example.  In the area of imprinted revenues, any murky color that cannot be readily identified is classified as “olive.”

This check is the only one currently considered to have an imprint colored “pale olive.” I have seen an one on a check of another user that could be classified as such as well. There was no regulation specifying imprint colors, so anything could be used providing it did not interfere with the function of the document.
Two-cent imprint trial color proofs are known in brown, green and black at least, though none of these colors were used in practice. 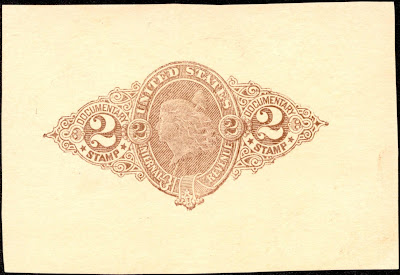 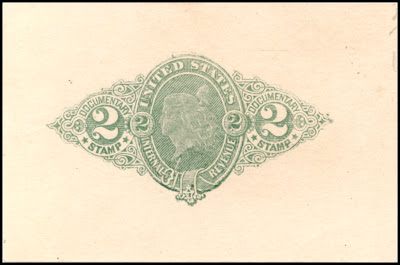 Figure 35. Trial color proof in green.
No actual use of green for two-cent imprints is known.
Posted by John Langlois at 12:01 AM