$1,000 Railroad bonds were a popular investment vehicle in the late 19th and early 20th centuries. Bonds in other denominations existed, but the $1,000 bond was by far the most common.

JW Palmer has provided properly taxed examples of much less common $5,000 and $10,000 bonds for today's post. 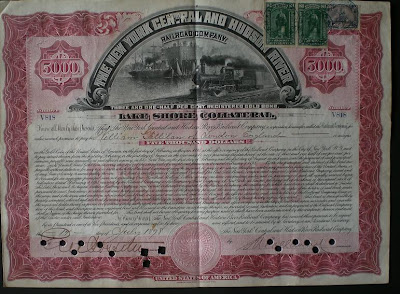 Properly taxed $2.50 at the rate of 5-cents per $100 or fraction thereof in face value, the above $5,000 bond from the New York Central and Hudson River Railroad was backed by a mortgage on the Lake Shore and Michigan Southern Railroad , then a wholly subsidiary of the NYC&HRRR. It's interesting to note that the purchaser was a Briton. That British government bonds only paid 2 1/2% to 2 3/4% at the time made American railroad bonds a popular alternative for many Britons. 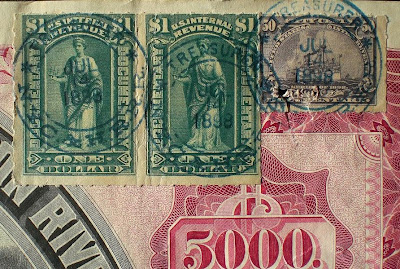 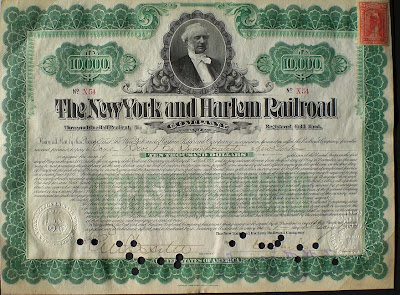 A nice single usage of the $5 Commerce issue paid the proper tax on the $10,000 New York and Harlem Railroad Bond shown above.

The railroad and mining industries were often intertwined as they depended upon each other for success. So it's not surprising that this $10,000 was owned by the Coxe Brothers Incorporated, a mining enterprise. 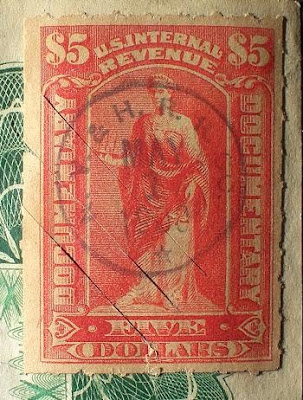 It is not unusual to find cut-cancels, in addtion to company datestamps, on the dollar values of the Spanish American War era revenues; added protection against reuse.