R157 is the dark green ten-cent postage stamp of the 1895 definitive series privately marked with a magenta I.R. handstamp by the Michigan Mutual Life Insurance Company of Detroit for use on their life insurance policies for a short period before they could obtain regular battleship revenues. Although these were privately produced, they are listed in the Scott Specialized. Sixty-six copies are reported to exist, according to a recent Spink auction description.

The document below is a mortgage executed in Huron County, Michigan, for $577 in August of 1898. It bears a ten-cent postage stamp, presumably of the 1895 definitive series (the stamp has not been watermarked) marked with a small magenta I.R. Can this be considered as an R157 variety?

The stamp in detail: 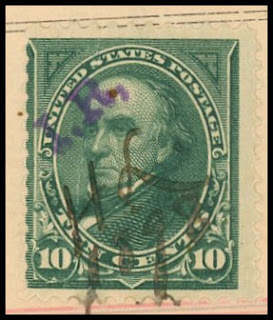 There is one major problem. Mortgages under $1,000 were not taxed. The stamp could be paying the tax for a general certificate, which was ten cents, but that was not required for registering a regular mortgage. It does not appear that this instrument should have been subject to any kind of documentary tax.

However, a number of people did not know this was the case, to judge from questions answered in the Compilation of Decisions Rendered by the Commissioner of Internal Revenue dated January, 1899. In that volume there were several rulings to the effect that mortgages under $1,000 were not taxed unless they were part of more complex financial transactions, and that registration of a mortgage was not subject to tax as a miscellaneous contract. It is possible that the Huron County Registrar did not know this.
It takes a suspension of disbelief to accept this document at face value, but the stamp is tied. The initials on it, H.L. for Hannah Lindsay, appear to be in the same style as her signature within, so it just could be.....
Posted by Bob H. at 12:01 AM