International Money Wire Taxed as a Bill of Exchange 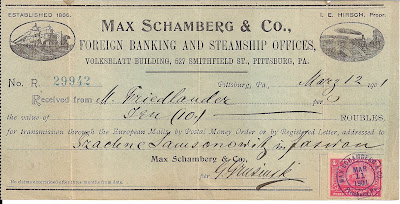 Receipt for Money Wire to Europe
Max Schamberg & Co., Pittsburg, PA
March 11, 1901
For years Max Schamberg was the consul for the Austro-Hungarian Empire, or at least for the Austrian Monarchy, in Pittsburg, Pennsylvania. In 1866 he founded his own company providing banking and transportation services, primarily to serve the ever increasing immigrant population in Pittsburg. He sold the business in the 1880s to Issac E. Hirsch, who is identified as the proprietor in the upper right corner of this 1901 receipt.
That this receipt for 10 Roubles is taxed 4-cents suggests that the money was transferred to Europe via cable where it either was converted to a postal money order or sent via registered mail to the intended recipient. Had an actual bill of exchange been drafted and sent through the mail, the tax stamps would have been affixed directly to that document and not this receipt. The receipt simply served as an appropriate medium for the tax stamps required by the wire transaction.
We do seek assistance regarding the name and location of the recipient. It appears to be Szachne? Lawsonordiz? in Lasman? We may be far off the mark with those spellings. As the amount was given in roubles, I suspect this may have been going to the Ukrainian area of the Austro-Hungarian empire, but that's purely supposition. Can anyone offer more definitive information?
As best I can determine, 10 roubles would have been worth around $100 in 1900. It would have been considered to be a singly-written bill of exchange for which the tax was 4-cents per $100 in value, so the tax of appears to be is correct. We'd appreciate comments from anyone who might otherwise confirm the exact exchange rate between roubles and dollars in 1901.