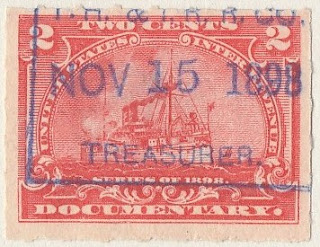 Check cancelled the same day and with same cancel type as the single above.  These stamps were clearly cancelled in the same batch.  The check was acquired in an Ebay lot and the single was a part of Henry Tolman's collection sold in an auction by Robert Siegel.
In March 1865 the Indiana legislature changed the name of the Terre Haute & Richmond Railroad to the Terre Haute & Indianapolis Railroad.  On 1 January 1905 the TH&IRR consolidated with the St. Louis, Vandalia & Terre Haute, Terre Haute & Logansport, Logansport & Toledo, and the Indianapolis & Vincennes to form the Vandalia Railroad Company.
Frank's Hammar Brothers post in October makes note of the company's reference to the presence of the Vandalia Line at its East St. Louis factory. 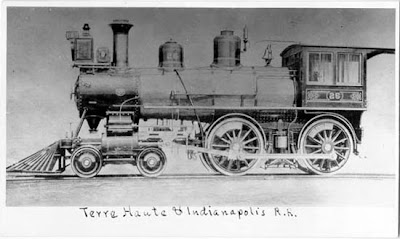