Cancel for November 13: Lewis A. May Company 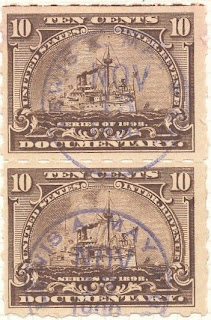 LEWIS A. MAY, CO.
NOV
13
1900
Lewis A. May and his business partner Eugene Enslen were both southern businessmen from Alabama that operated a brokerage firm in New York City.  Enslen remained in Birmingham, Alabama and was inactive in the day to day affairs of the Lewis A. May firm.
Though the firm was formed in August 1898, the firm went bankrupt in late 1900 after the Exchange pulled its ticker machine from the Lewis A. May office in New York.  The story of the firms closure can be found in this New York Times article.
Posted by John Langlois at 12:01 AM