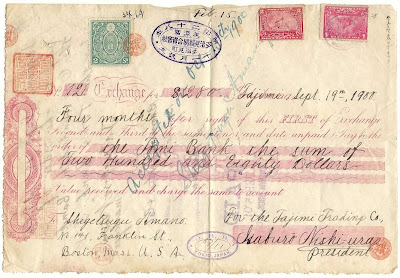 $280 Bill of Exchange
Tajimi Trading Company, Tajimi, Japan to Shigetsugu Amano, Boston, Mass.
September 19, 1900
Bob Patetta scan
Similar to the Japanese bill of exchange previously considered, both of the bills shown today were written as four month sight drafts payable through the Tomi Bank in Tajimi, Japan. The Tomi Bank then routed them through the One Hundred Bank in Toyko who sent them on to the Brown Brothers & Company in Boston for collection from the importers to whom they were addressed. The reverse of the draft above is not shown, but the transmittal endorsements are nearly identical to those of the other drafts.
The tax on bills of exchange inbound to the US was 2-cents per $100, or fraction thereof . So both were properly taxed six cents; the $280 bill above bears 2- and 4-cent battleship revenues and the $300 bill below has a pair of 3-cent battleships. That both bills were taxed 2-sen in Japan, the same as the $200 bill shown previously suggests the Japanese tax was a flat 2-sen per bill regardless of its amount. We invite any reader able to confirm the Japanese tax rate to comment below. 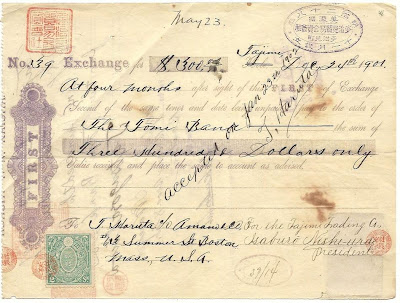 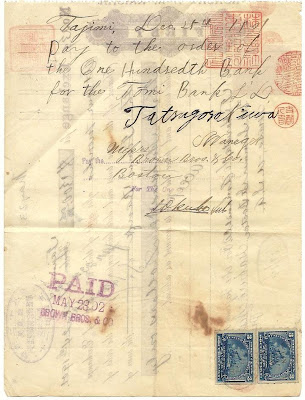 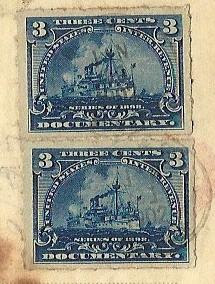 The US stamps on these two bills again were applied by Brown Brothers. The paperwork that most likely accompanied the bills is not present, but most certainly the Brown Brothers and the banks in Japan charged fees for processing them, perhaps deducting them from the payment amount at each step.
Posted by Frank Sente at 12:01 AM