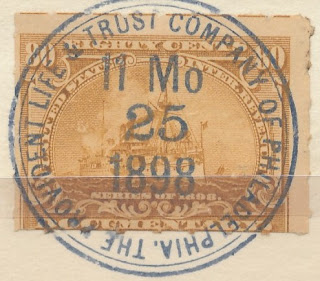 THE PROVIDENT LIFE & TRUST COMPANY OF PHILADELPHIA.
11  Mo
25
1898
Interesting big cancel, with a long name spelled out in a CDS.
Top it off with "11 Mo" for November, a Quaker dating method in which the names of the months are not used.  Provident Life and Trust was likely a Quaker owned and operated company. 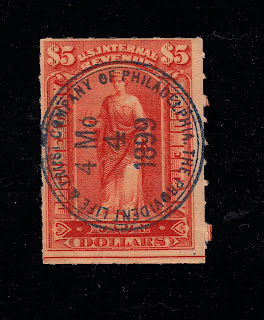 David Thompson sent me this image of an R175 with a similar cancel to that above. 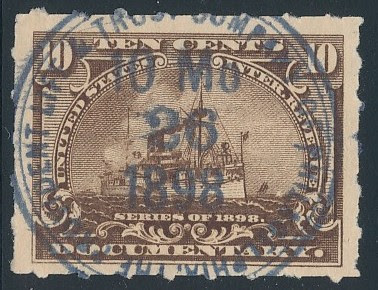 Another example of a Provident Life cancel.

From Wikipedia:
The Quaker "plain calendar," or "scriptural calendar," differs from what Quakers refer to as the "world's calendar".  The plain calendar uses numbers to denominate the names of the months and days of the week. It emerged in the 17th century in England in the general non-conformist movement but became closely identified with Friends by the end of the 1650s and continuously since that time.
The plain calendar does not use names of calendar units derived from the traditional names due to their derivation from pagan deities. Instead, it uses ancient terminology as found in the bible where the days of the week were numbered; for example, Jesus' followers went to the tomb early on the First Day of the week. From this, the plain calendar week begins with First Day (equivalent to the traditional Christian Sunday) and ends on Seventh Day (Saturday). Similarly the calendar's months run concurrently with the traditional months albeit named First Month, Second Month, etc..
*** 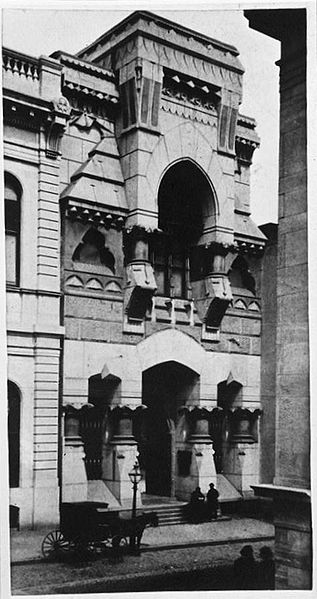