Foreign Bill of Exchange - Japan to US 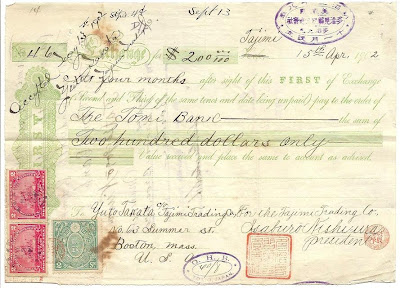 $200 Foreign Bill of Exchange - Japan to US
Written by Tajimi Trading Company, Tajimi, Japan
April 15, 1902
Bob Patetta scan
The trail of this bill of exchange is easier to trace than the one from Germany considered in our first blog about bills of exchanges inbound to the United States from foreign countries. In this instance it appears the Tajimi Trading Company is requesting a transfer, or perhaps a payment, of $200 from its branch office in Boston, Massachusetts to its home office in Tajimi, Japan.
In 1900 the Tajimi Trading Company was a major exporter of Japanese pottery and other ceramics with offices in Boston and New York. Their store in Boston was located at 63 Summer Street. Today the City of Tajimi is still known for its ceramics; it hosts the Mino International Festival every three years. 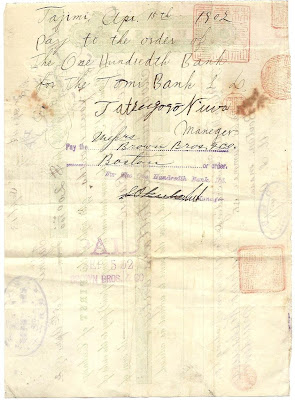 Reverse Side Transmittal Handstamps
of Firms Processing the Exchange
Bob Patetta scan
The Bill of Exchange was initiated by the Tajimi office of the company on April 15, 1902 requesting payment of $200 AT FOUR MONTHS SIGHT from its office in Boston. The payment was requested through the Tomi Bank in Tajimi.
Following the endorsements on the back of the bill: Tomi Bank referred it to the One Hundred Bank(OHB) in Tokyo; and OHB requested payment through the Brown Brothers & Company in Boston. Brown Brothers was a major international merchant banking company that had offices in many major cities in the US and Great Britain. Today's Brown Brothers Harriman in Boston traces its roots to B. B. & Co.
Referring again to the front of the bill, Brown Brothers apparently presented it to Yuto Takata, of the Boston office of the Tajimi Trading Company to whom the bill was addressed, on May 13, 1902 as his signed "ACCEPTED" endorsement of that date appears in the upper left corner of the bill. The penned notation "stps 4¢" obviously refers to the 4 cents tax due and "Sept 13" is the due date for payment , four months after May 13 the "at sight" date.
The two 2-cent R164 battleship revenues, paying the applicable tax of 2-cents per $100 in value were affixed and cancelled by Brown Brothers. I'm not able to decipher the Japanese markings, but the 2-sen Japanese revenue stamp had been applied earlier in Japan, I suspect by the Tajimi Trading Company.
The final endorsement on the back shows Brown Brothers effected payment back through channels on September 15, likely after receiving payment from Mr. Takata. 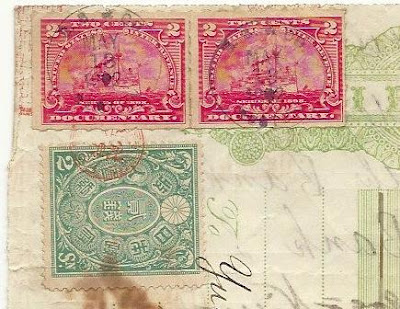 Detail of Stamp Cancellations
Cancel on the US R164 Battleships reads:
B. B. & Co.
MAY/13/1902
BOSTON
Bob Patetta scan
Our thanks again go to Bob Patetta for providing another interesting usage from his collection of 1898 revenue documents.