Foreign Bill of Exchange - Germany to US via Great Britain

This bill of exchange is written in the form of a bank draft. The trail of its payment is hard to follow because it was routed though numerous banks in three countries. The applicable US Spanish American War tax, two cents per $100 in value, or fraction thereof, for bills of exchange inbound to the US from a foreign country is easy enough to understand. But without the documentation and payment instructions that most certainly accompanied this draft, we don't know who was paying whom, or for what purpose. The draft itself offers scant information, just a reference to a March 20, 1900 letter of credit.

From a fiscal history standpoint we note that when it was received by the London Agency of the Deutsche Bank of Berlin, they paid the one penny British tax. And when the National Bank of Burlington, Iowa ultimately received and paid the draft they properly taxed it two cents with an R164, 2-cent battleship documentary, the proper amount for a payment less than $100. The standard conversion rate at the time for a British Pound was $4.85; so 20 Pounds = $97.00.

20 Pounds Sterling Foreign Bill of Exchange - Germany to US
Written as a Sight Draft by Oberrheinische Bank - Heidelberg
August 8, 1900
I count ten handstamp markings on the draft, six on the front, and four on the back. It went from the Heidelberg branch of the Oberrheinsche Bank; to their Mannheim branch; to the Deutsche Bank of Berlin; to the National Provincial Bank of England where the trail seems to go cold. The Union Bank of London and the Continental Bank of Chicago were listed on the draft as correspondent banks, but the draft doesn't appear to have been routed through either of them. In fact the Chicago Bank reference was crossed out at some point. So how it actually got to the National State Bank of Burlington, Iowa is unclear.
Happily it nonetheless made its way into philatelic hands as it is a nice example of a combination usage of two country's revenue stamps. 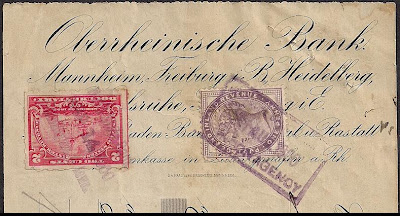 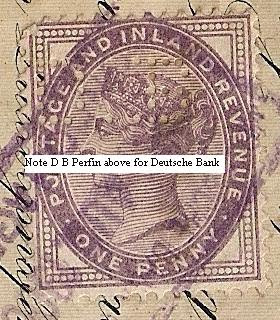 Deutsche Bank "D" "B" perfin
The draft itself bears perfins for the numbers "25" and "8" (through the reference to the Union Bank of London). The Deutsche Bank in London probably added those, a likely reference to the date they processed the draft, August 25, 1900.
We'd like to show other examples of multi-country tax stamp combinations and invite anyone having examples involving 1898 US revenues to send scans of them with a brief description to 1898revenues@gmail.com.
Posted by Frank Sente at 12:01 AM