$5,000 Bill of Exchange, Consolidated Kansas City
Smelting and Refining Company, Mexico City
to an unidentified Mexican payee
paid through Consolidated's New York Office
JW Palmer scan
We've blogged about several foreign bills of exchange inbound to the United States in recent days. Today we view another one courtesy of JW Palmer that was taxed on July 2, 1898, the second day of the Spanish American War tax! The "sight date" for this draft was July 1, 1898, the first day of the war tax, when it was "accepted" for payment 10 days later on July 11 per the draft's terms of payment.

Why wasn't it taxed on July 1, the date it was accepted? Was the Consolidated Kansas City Smelting and Refining Company unsure about whether or not tax was due -- it was written June 25, 1898 some 5 days before the tax went into effect; or didn't they have any stamps on July 1, or? The new tax stamps were hard to come by in New York City on July 1, 1898 and it might have taken Consolidated a day to acquire some or to find out that, yes, even though the draft was written prior to the effective date of the new tax law, the tax was required as the payment date, the relevant date for taxation, was after July 1.

It's a nice early usage of a pair of the R171 50-cent battleship documentaries, properly paying the 2-cent per $100 in face value tax on a $5,000 inbound bill of exchange. Their usage suggests that the $1 Commerce issue may not have been available in New York on July 1.

Reverse of BOE showing transmittal endorsements and
Mexican Revenues: two 1-Peso and 1 50-Centavos from the 1897 issue
JW Palmer scan
It is unclear to whom Consolidated directed this draft; the Payee's name and their transmittal endorsement on the back are not readable; nor is the handstamp on the Mexican revenue stamps. A hint appears in the bottom left corner on the front where "H. S. & Co. No.........." is handstamped in red with number 66658 entered in pen on the dotted line; presumably Consolidated's internal reference to the payee's invoice or letter of credit number. But we've been unable to determine the identity of "H. S. and Co."
It is clear that "H. S. and Co." referred the draft to an international banking house, Lazard Freres, in New York, who collected the payment from Consolidated's New York headquarter's office. The Lazard Freres firm today continues as Lazard and John previously has blogged about their cancels. 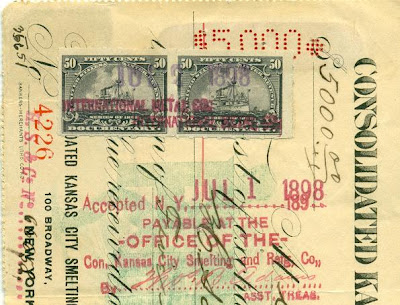 Curiously the stamps are cancelled with a single-line handstamp of the INTERNATIONAL METAL CO. Like the Consolidated Kansas City Smelting and Refining Company, the International Metal Company was a huge mining firm doing business in many Western States and then US Territories as well as in Mexico. The firms may not have been directly related, but they shared some common directors. Maybe Consolidated got the 50-cent tax stamps from International?

We'll likely never know, but it sure is a nifty draft and our thanks go to JW Palmer for sharing it.