Another Money Wire to Europe

Receipt for Money Wire to Europe
P.V. Obiecunas, Pittsburg(h), PA
December 28, 1899
Wasko Szandala sends 40Kr. (about $10.00) by wire through P.V. Obiecunas in Pittsburg(h), PA to Mila(sp?) Czupa in Boglarka, Hungary, a small village now located in Northeast Slovakia. The "P.O. Richwald" reference suggests that the money would be sent to that neighboring town as it had a post office where the money could be received.
According to the 1913 census Boglarka had 248 inhabitants, all Ukrainian(Ruthenian). Richwald had 850 residents, all Slovaks. Although Richwald had a post office, it did not have a telegraph. The closest town with telegraph service was Bardejov, about 15 Km to the East.
It's unclear where Obiecunas sent the wire, but the money was most likely converted to a postal money order and sent to Richwald for delivery. 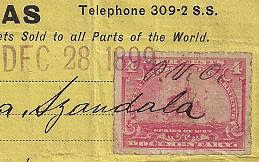 Untied Pen Cancel: P. V. O.
Stamp Tied by Datestamp and Payer's Name
That the stamp is tied by the name of the payer and the datestamp suggests it was already affixed to a blank receipt form. Many Pittsburg area immigrants likely sent funds to family members in Europe via Obiecunas and other similar firms providing banking and European exchange services. That the P.V.O. pencancel doesn't tie suggests it was a precancel, another hint the forms were prestamped and ready for use.
As the amounts were most likely small (under $100) it would have made sense to set up the receipts in advance with a 4-cent stamp paying the tax on a singly written outbound bill of exchange. Again, as there was no financial instrument was actually drawn, the receipt provided the medium for recording the tax payment for the transaction.