A Bill of Exchange from Colombia

$500 Bill of Exchange
Pedro Mantilla, Rionegro, Colombia to Munoz & Espriella, New York
October 10, 1898
Without any of the accompanying documentation; there is a pencil notation "carta" (letter) dated 14 October 98 at the bottom of the draft; one can only speculate the purpose of this 90 day sight draft drawn against the Munoz & Espriella firm of New York. The firm appears to have been a shipping agent so perhaps this was a request for payment for some a shipment.

Reverse of $500 Draft Showing Transmittal Endorsements and
10-cent, R168 Battleship Revenue Stamp
The draft was routed through Silva Otero Brothers in Bucaramanga, the main city in the Department of Santander, Colombia where Rionegro also is located. Silva Otero Brothers sent the draft to Munoz and Espriella who accepted it on November 9, 1898 for payment as of February 7, 1899. At the rate of 2-cents per $100 in face value, or fraction thereof, Munoz and Espriella paid the proper tax, 10-cents, with an R168 ten cent battleship revenue. 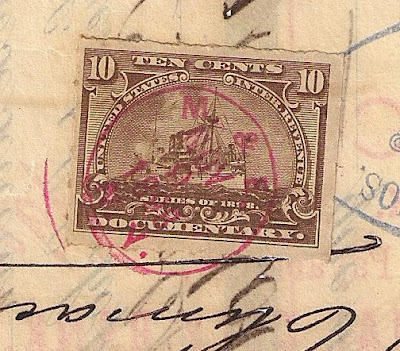 The draft looks pedestrian, but it was printed on Crane Japanese Linen paper with an ornate watermark featuring a crane and the year date 1896. A similar watermark may be found here.
Posted by Frank Sente at 12:01 AM