A Bit of a Puzzle

This interesting certificate of deposit was discovered by Mike Morrissey. He sold it to me when he moved several years ago: 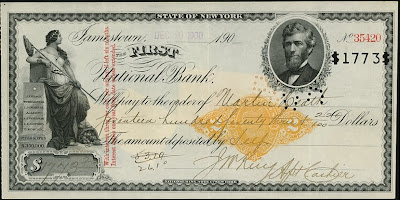 Certificates of deposit were taxed from July 1, 1898 through June 30, 1901. If no interest was offered nor granted the tax was a flat two cents, no matter how much was deposited. If interest was guaranteed, the tax was two cents per one hundred dollars or fraction of one hundred dollars. Many deposits fell into an intermediate category where interest was given only if the money was left for a particular length of time, usually six months. In such a case, two cents tax was paid at the time of deposit, and the remainder was paid if and when interest was granted.
The certificate shown above bore interest of three per cent per annum only if the deposit were to be left at least six months. It was properly taxed two cents via imprinted revenue at issue on December 20, 1900, and an additional thirty-four cents when redeemed, since the total tax on the $1773.22 deposit was thirty-six cents if interest was paid. 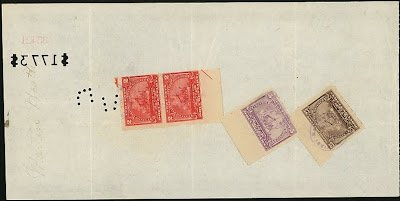 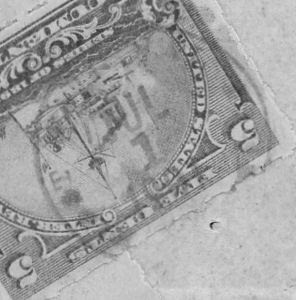 Two possibilities come to mind. First, if the bank did not realize that the tax had been repealed, it could have collected it in error. This is not likely, as there were more sweeping changes effective on that date, such as no longer needing a revenue stamp on checks payable on sight or demand. The repeal would have been widely known for some time, surely by the First National Bank of Jamestown.
The second possibility is that the certificate was redeemed on Saturday, June 29, and that the bank routinely processed such surrenders on the following Monday. Under this scenario the depositor would have collected his money on Saturday (or even Friday?) and paid the bank for the stamps, which were applied to the certificate and canceled Monday, July 1, along with any other certificates that had come in on the weekend. The redemption would have been properly taxed, but the date on the stamps would not have reflected the actual date of the transaction.
The only way to get a better feel for what went on here is to find other certificates from the same bank which show deposits redeemed near the end of a calendar month. I have another one dated in December of 1900, but it apparently was redeemed sometime after June 30, 1901, since there are no additional stamps on the back. These certificates do not seem to be too uncommon, so perhaps others can offer additional data points.
Posted by Bob H. at 12:01 AM