As this website has spent a bit of column space over the past couple of months reviewing Richard Fullerton's battleship documentary printed cancel list, there are many questions and issues that have arisen to this correspondent.  One question has been Mr. Fullerton's choice to exclude other users of printed cancels on the documentary issues, including Provident Savings, The Girard Trust Company, and a county clerk's office in Vermont.  But perhaps the greatest curiosity for me has been the cancelling practices of the company that cancelled the stamp below, with a neatly printed cancel that clearly shows the cancel was applied after the stamp was placed on a document.  Contrast this example with the other examples below from Elgin National Watch Company.  I would have been convinced that these cancels were applied to these stamps while they were still in unused sheets.  The example just below shows otherwise, at least for this particular stamp: 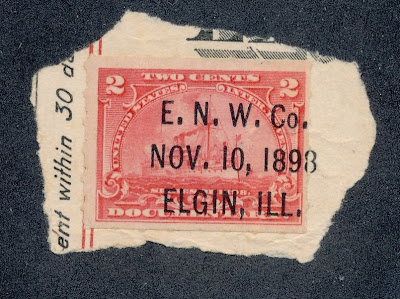 Elgin National Watch Company document fragment showing the cancel was printed once the stamp was applied to the document.

Close up showing second 8 printed on the document.
How were these cancels printed?  Elgin National Watch obviously required the systematic cancelling of a large numbers of stamps on documents, and had the capability to do so.  I do not know whether any complete documents with these stamps and cancels are known.  The fragments don't tell us enough about what type of documents these are.  If someone has a complete ENW document with and 1898 series stamps and cancel, please let us know at 1898revenues@gmail.com.  And if any experts in printing out there know how these cancels might have been applied we would also appreciate an email sent to the same address. 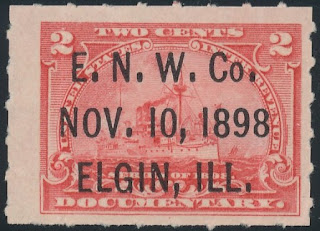 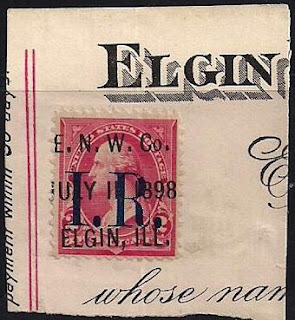 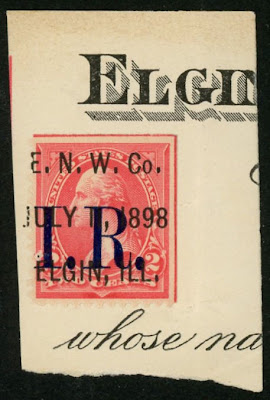 Bob Hohertz sends this scan to complement Frank's piece above.  This item shows the J of July printed on the document. 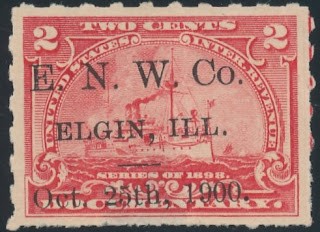 E.  N.  W.  Co.
ELGIN,  ILL.
----
Oct.  25th,  1900.
Printed cancel, serif font, HH stamp
A future, revised version of the Fullerton catalog should consider the addition of all documentary printed cancels, and should probably include the ENW cancels.  However, it would be important to understand just how these cancels were printed.
********** 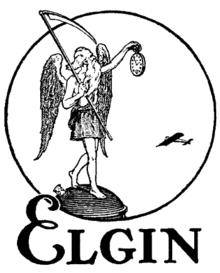 Elgin National Watch Company's Father Time logo
Commonly known as the Elgin Watch company, the ENW Co.was founded in 1864. Former associates of the Waltham Watch Company and Chicago watchmaker J.C. Adams had discussed forming the first large watch company in the Midwest, and after a trip to Waltham, Massachusetts, Adams approached former Mayor of Chicago Benjamin Wright Raymond as an investor. Adams and Raymond convinced many others to invest.

The growing young city of Elgin, Illinois, some 30 miles to the northwest, was chosen as factory site. The factory was completed in 1866.  Elgin National Watch stopped producing watches nearly 50 years ago.  The rights to the name "Elgin" were sold to a company called MZ Berger Inc, that specializes in manufacturing its watches in China and distributing them outside the traditional watch dealerships. Elgin-branded watches produced after 1964 have no other connection to Elgin or the Elgin Watch Company. 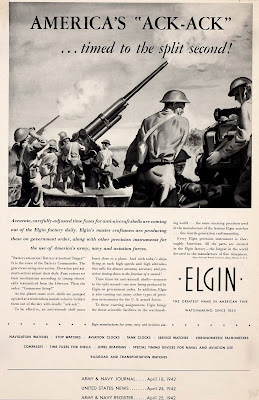 Elgin National Watch supplied time pieces to the US military and advertised that fact.
Posted by John Langlois at 12:01 AM