A Bill of Exchange from the Territory of Hawaii 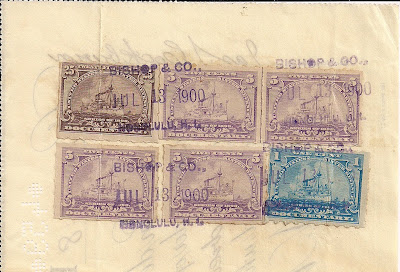 Cancel from Reverse
BISHOP & CO.,
JUL 13 1900
HONOLULU, H.I.
Hawaii became a US territory on July 7, 1898 just days after the War Revenue Law took effect. The law was applicable to US Territories as well as States so applicable documents from Hawaii had to be taxed as they were in all the other US Territories at the time. Examples of taxed documents from the US Territories are uncommon and from Hawaii, even moreso.
At the standard rate of exchange, $4.85/£1.00, £459:3:8 equaled about $2,228, so this second of exchange from a set of three was properly taxed 46 cents at the rate of 2-cents per $100 in value or fraction thereof.
Because of the vagaries of the mails and other forms of transit, it was standard practice for banks and major companies to write payment drafts like this bill of exchange in sets of two or three copies, sending each separately, often by different routes, with the understanding that only the first to arrive would be negotiated. All copies of bills of exchange written in sets were taxed at the rate of 2-cents per $100 or fraction thereof. As this second of exchange shows no evidence of being cashed, one of the other copies must have arrived first.
Bishop and Company, founded by Charles Bishop, was the first bank in Hawaii. It became the First Hawaiian Bank in 1960 and continues today as part of the BancWest Corporation.
Posted by Frank Sente at 12:01 AM