Bob Hohertz' series on 1898 stamped paper continues here with examples of Scott RN-X7.  This series has considered the 1898 stamp paper thus far according to Scott number.  This is the last number in the 1898 series:


Scott RN-X7 is listed as being 2¢ “orange,” with a line just below for “pale orange.” Scott would have been much better off just saying “(shades)” after the initial listing, as they do in the listings for other types of revenue stamped paper imprints. There are myriad variations in color that fall under X7, and many of them are not “pale.”

In fact, there is a gradation between yellow and orange that makes it difficult to tell where one leaves off and the other begins. 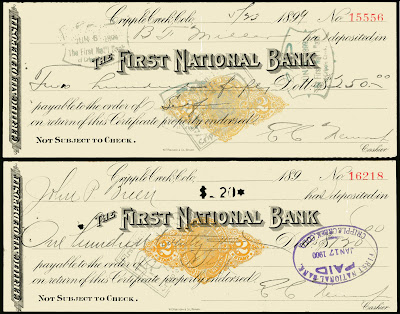 Figure 36. I do not make any attempt to distinguish between X6 and X7 in my collection, as otherwise identical checks are known to have imprints that vary. These two certificates of deposit were used in the first half of 1899, but presumably come from two different printings since the imprint on one is orange, and the other, yellow.

Figure 37
Figure 37. The imprint on this unused certificate of deposit is pretty clearly orange, to my eyes.

Figure 38
Figure 38. Pale orange, to be sure. If the color were much lighter, it wouldn’t be there.

Figure 40
Figure 40. Almost brown.  Enough on colors. A used X7 catalogs in the range of $1.00, which is meaningless. Here are four examples that would bring much more, considering location, signer, or the type of document.

Figure 41
Figure 41. An unused check with a printed Alaska dateline. The only one currently known.

Figure 44
Figure 44. An imprinted money order. Three are currently known, only one from this company. A philatelic souvenir to be sure, as all surviving money orders from this period are, but if it had not been created we would not have known that the Adams Express Company had used imprinted revenues.

Like color, value is in the eye of the proverbial beholder.

X7a is “printed on back only,” and values are given for used and unused examples. At this point we need to get into the subject of the star-punched oddities.

In a number of cases the imprints on these star-punched items are in unusual places that do not appear to be required for any logical reason, which is the case for unused X7a's. Those I own or have seen have no vignette on the front to cause the imprint to be moved to the back, and in all cases the imprint is inverted on the back as well. They are not quite printer's waste, but they do not appear to have been prepared for use in that form, either. How should these be treated by Scott? Delisted? Footnoted? 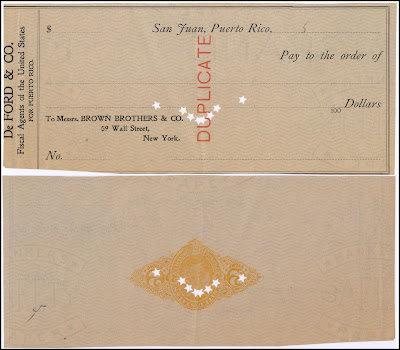 Figure 45
Figure 45. An unused check with a Puerto Rico dateline, (inverted) imprint on the back only, badly miscut and bearing star punches. 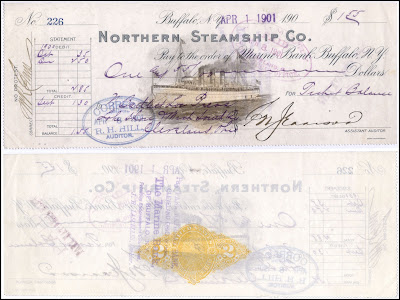 Figure 46
Figure 46. Genuinely issued and used checks and drafts are know with the imprint placed on the back to avoid a vignette on the front. This Northern Steamship Company merchant’s draft is one of the most handsome examples known.

X7b is missing from Scott. Quite some time ago it was the minor listing for a parlor car ticket, which now is X7i.

X7c is “printed on front and back.” There was no reason to do this in connection with the Spanish American War imprints, and any such check is due to an error. Again, the unused example is one of the star-punched oddities. 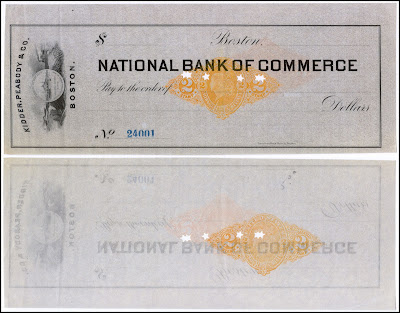 Figure 47
Figure 47. There is no reason this check should have an (inverted) imprint on the back.

At least two used checks exist with an imprint on both front and back. These would have been created by the imprint printer running a sheet through the press the wrong way, noticing the mistake, and then putting it through the right way. There was no reason that this needed to be done, and no reason not to do it. It would have been up to the printer. 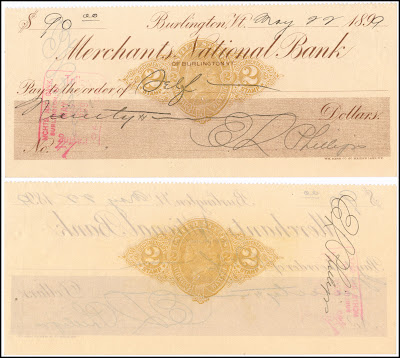 Figure 48
Figure 48. This check has complete imprints on both front and back. The one on the back serves no purpose. The other used example has the imprint on the back inverted as well.

X7d is reserved for instruments with the imprint “vertical.” Several users chose to have this done to avoid imprints in the center of the checks. There is no listing for an unused example, but one does exist, with star punches. If Scott is going to list other varieties based on star-punched examples, why not here?

Figure 49
Figure 49. The only currently known unused check with a vertical imprint.

Figure 51
Figure 51. The only known example of a check with a vertical imprint at right.

Figure 52
Figure 52. The imprint on this check appears to be a true double impression.

Figure 53
Figure 53. The imprint on this used check exhibits light doubling of the design at lower right. This is probably due to some slippage during printing, rather than a complete second pass through the press.

Figure 53a. Detail of the doubled area.

Figure 54
Figure 54. This is not exactly what we think of as a double impression, but it is obvious that the check went through the press twice. Why, is anyone’s guess.

X7i is the number for the two-cent imprint on a parlor car ticket. Two unused examples are known. 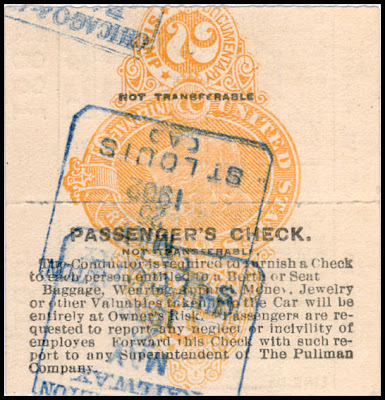 Figure 56. Used X7i’s are almost as rare as the unused ones. 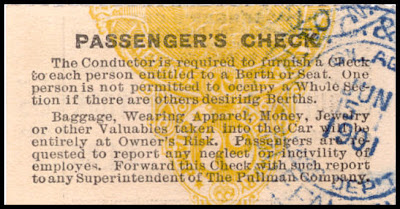 Figure 57
Figure 57. X7i is known in golden-yellow, and if the listings were consistent something should appear under X6 for parlor car tickets, in my humble opinion. I'd rather see X6 deleted and "shades" added to X7, with a minor listing for olive under X7.  Also, to be consistent with the way X1, X4 and X5 are listed, there should be a distinction between "used" and "partial" tickets, as the items above show that both exist.


X7g is the listing for inverted imprints. There is no listing for unused copies, and none are known.

Figure 58
Figure 58. Inverted imprints are known on the checks or drafts of nine different users. This is one of the first two recorded examples.

There are several other imprint varieties that could be listed under X7. One is the presence of a twenty centimes French revenue handstamp on the check, along the lines of RN B1d, the American Phototype design with a ten centimes handstamp.

Figure 59.
Figure 59.  Perhaps the most fanciful listing would be for “omitted imprint.” The only way to tell if an imprint is totally omitted is for the check to be attached to one with an imprint, as below. The bottom check in this pair probably was folded under the one above it when the sheet went through the press. 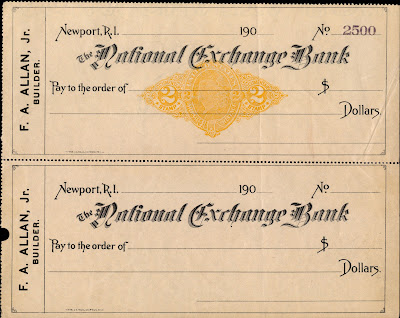 This completes a run-through of the Scott-listed X types. If and when I can decide what the status of the star-punched items should be, I may try to have the catalog changed to reflect what is and is not known to exist.

Figure 61
Figure 61. How would you describe the imprint(s) on this check? It looks like it was used to clean the press...
Posted by John Langlois at 12:01 AM