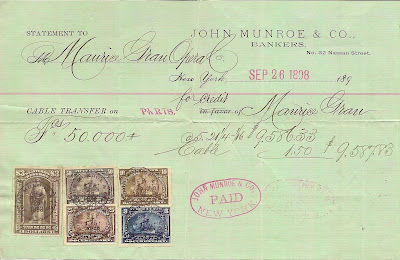 John Munroe & Co. Bank Transaction Statement
for a Money Wire Taxed as a Bill of Exchange
September 26, 1898
Tim Kohler scan
From 1898 to 1903 the Maurice Grau Opera Company produced the operatic season at the Metropolitan Opera House in New York City. Grau often travel abroad personally to secure contracts to bring top European talent to the Met's New York stage.
The above banker's statement documents a cable transfer of 50,000 francs "for credit of" Maurice Grau indicating that Grau was wiring money to himself for use while in Paris. As there was no tangible draft, check, or bill of exchange upon which to affix the tax stamps required by the exchange transaction, the bank placed them on the statement sent to Grau documenting the transaction.
That no actual tangible bill of exchange ever existed for this transaction highlights the point that what was being taxed in this instance was the transaction, not the document itself. In other instances however, such as with miscellaneous legal certificates, it clearly was the War Revenue Law's explicit intention that the physical document be taxed, and not necessarily the underlying transaction it represented. 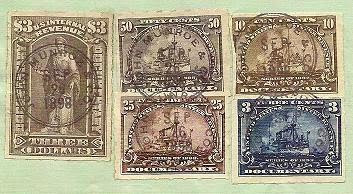 Double-ring Circular Date Stamp
JOHN MUNROE & CO.
SEP/26/1898
*
Tim Kohler scan
The tax on an outbound single-copy bill of exchange, as this was considered, was 4-cents per $100, or fraction thereof. The 50,000 francs, plus the cost of the cable, converted to $9,587.83. So the tax should have been calculated as (96 x .04 = $3.84). Presumably the clerk handling the transaction miscalculated as $3.88 in tax is present on the statement, an overpayment of $0.04. Usages of the $3.00, R174 Commerce issue, and the 3-cent, R165 Battleship are uncommon; to find them both on the same document, extremely so.
Our thanks go to Tim Kohler for providing this unusual bill of exchange document.
Posted by Frank Sente at 12:01 AM