An Incoming Bill of Exchange

When I saw this rather bedraggled first of exchange, directed to a U.S. company from Mexico City, at a stamp show my heart beat a bit faster due to its date - July 1, 1898. That feeling quickly dissipated when I saw that the Mexican revenue was canceled on that date, but the U.S. revenue not until July 6. I bought it anyway. 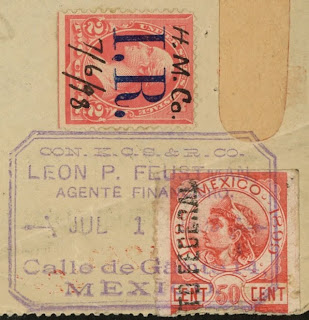 The dating formed a logical sequence, as the bill was issued in Mexico City and sent to New York for payment. The U.S. stamp was added by a representative of the Hidalgo Mining Company, possibly in Pittsburgh on the 6th of July, as there is an undated handstamp on back indicating payment from the Lincoln National Bank of Pittsburgh to the Seaboard National Bank of New York. The Seaboard National marked the instrument as paid on July 7th.

All well and good, but the tax paid was not sufficient. In the Compilation of Decisions Rendered by the Commissioner of Internal Revenue, January 1899 it was clearly stated, "Checks drawn in a foreign country, but payable in the United States, taxable 2 cents on each $100 or fraction thereof." The tax on this $996.65 bill of exchange would have been 20 cents. But at least one bank found it necessary to ask the IRS for that ruling.
It really isn't clear from reading the War Revenue Act what the proper tax should have been - two cents like a check cashed in the United States or twenty cents like a bill of exchange written in the United States - so the Hildago Mining Rep can be excused for adopting the cheaper view. If only the timing had been such that he had added the stamp on July 1.....
Posted by Bob H. at 12:01 AM