On Beyond Holcombe: T. Sisson & Company, Wholesaler and Retailer 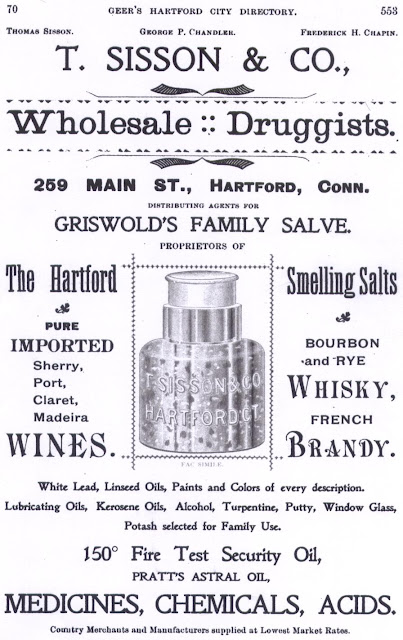 Editors Note: Malcolm A. Goldstein is a new contributing blogger for 1898 Revenues. This post is part of a continuing column on the companies that used proprietary battleships.

T. Sisson & Co was a prominent wholesale and retail establishment in Hartford, CT for a century. It existed as a variety of partnerships until 1874, when it became known by that name, and it incorporated in 1907 as Sisson Drug Co. Thomas Sisson began work as a clerk for the predecessor firm of Lee & Butler in 1843 at age fifteen, became a partner in that firm in 1858, and maintained his establishment in the same Hartford location for sixty-four years until his death in 1907. A canny businessman, he served as a member of the Board of Directors of the First National Bank in Hartford as well as the Connecticut Mutual Life Insurance Co. He traveled in the highest circles of Hartford society, for his son-law, also raised in Hartford, later bragged of being a friend and neighbor of Mark Twain, then a prominent resident of Hartford. The firm was the proprietor of Hartford Smelling Salts and the distributor of Griswold’s Family Salve, a concoction originated by Chauncey G. Griswold, another pharmacist and physician in Hartford whose recipe was sold to Sisson in 1892 after Griswold’s death by Griswold’s son-in-law. 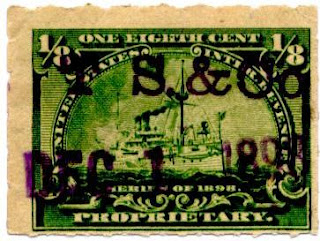 Every story about patent medicine contains the obligatory story of the lone genius sweating over a hot fire in quest of the perfect formula, while his ceaseless endeavors potentially threaten the economic stability and well-being of his family. In this case it was Griswold, originally a schoolteacher by training, not Sisson, who struggled to perfect the blend of secret, exotic ingredients for the Family Salve and whose tribulations were later memorialized by his grandson (recounted on a local museum’s website). While the American Medical Association never denounced this compound, perhaps because it was applied externally, in 1934 the Food and Drug Administration seized a lot of Griswold’s Family Salve as misbranded and asserting fraudulent claims. Navigating this setback, Sisson Drug Co. apparently continued to market the salve until 1955, when a principal ingredient, oleate of lead, was determined to be a potential toxin. Despite its hidden danger, Griswold’s Family Salve was a popularly marketed salve for about seventy five years. Even now requests appear on the Internet for its formula, which many fondly recall was greatly helpful in removing splinters. One inquirer claimed to still have a stick handy for use as recently as 1998. Sisson Drug Co itself ultimately evolved into the Hartford Wholesale Drug Co. sometime in the latter part of the Twentieth Century. 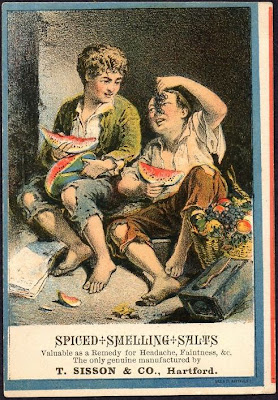 One other mention of the T. Sisson & Co. is noteworthy as an illustration of the infighting that existed in the drug industry in the Spanish-American War era. In 1901, the company was named one of many defendants in a lawsuit brought by a Brookline, MA retail druggist asserting that it participated in a conspiracy to block plaintiff retailer from purchasing pharmaceutical goods unless it adhered to rules and regulations essentially dictating plaintiff retailer’s resale price. Price fixing and competitive edge were on-going subjects of concern, discussion and litigation in an era which was just beginning to grapple with the implications of trusts and monopolies. The contemporary news reports discuss only a pre¬liminary decision which actually favored the retailer. The case then disappears from the records. Whether it was later settled by an unreported agreement made out of court (as most law cases ultimately are), or whether it dragged on indefinitely while the retailer’s finances declined, the only known certainty is the challenging retail firm went bust in 1904! One way or the other, price control seems ultimately to have won out in this instance. 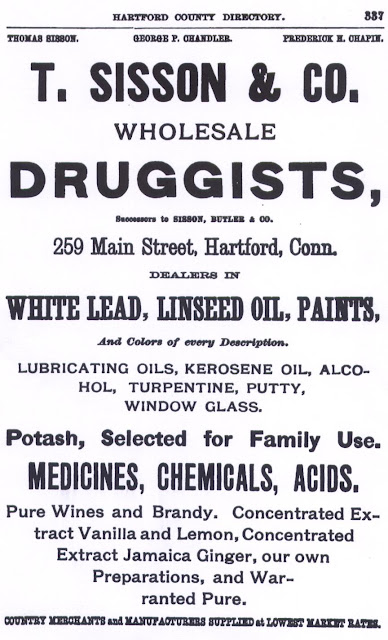