I was ever so pleased when Dave Thompson and John Langlois took special note of the "Maiden Vignettes" on several of the stocks I used in my introductory blogs about the taxation of stock certificates. As I approached those blogs I had been tempted to use only stocks featuring that specific vignette and make it a secondary focus of the discussion.
Instead, I also included some other stocks and chose to focus solely on the tax rates, the main purpose of those blogs. But hey, thanks guys, your sharp eyes have provided the perfect segue to today's blog about the "maiden vignettes" and how they actually have a connection to the 1898 revenue field. 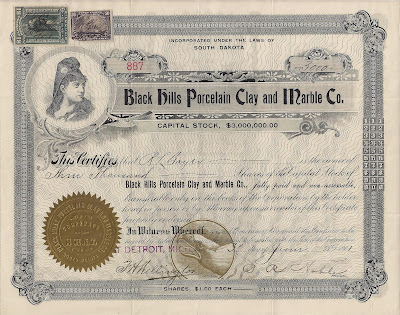 $3,000 Original Issue Stock Certificate
Black Hills Porcelain Clay and Marble Company
June 3, 1901
First, here's another stock certificate featuring a "maiden" vignette. At $1.00 each, 3000 shares in the Black Hills Porcelain Clay and Marble Company amounted to $3,000. At 5-cents /$100 the $1 R190 Commerce Overprint and R171 50-cent battleship stamps properly paid the $1.50 tax on an initial issue. The Ornamental Overprinted Commerce Issues, R190-R194, are difficult to find used on documents as they were in use for only a short time. 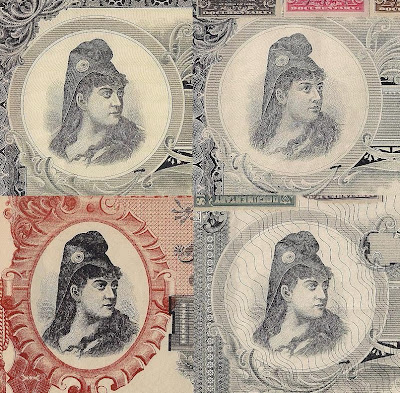 Composite Detail of "Maiden" Vignettes from Today's Blog (lower right maiden)
March 29, 2011 Blog (upper left maiden) and
March 30, 2011 Blog (upper right and lower left maidens)
If you look closely all of these "maidens" are a bit different, but all likely derived from the same source. The Verde King and U.T.D. Sprinkler stocks have the same border and overall design on the front, but the backs are different. None are engraved; they're simply cheap litho stock (no pun intended) forms, readily available from any printing company.
Unlike a major railroad company that could use an engraving of one of its own locomotives as a vignette, none of these four companies likely could show anything of tangible corporate significance on their certificates. The next best option was to use an "All-American" allegorical figure -- the rah rah baseball, hotdogs, and apple pie concept. But these are not mere maidens, they're Lady Liberty, a then popular symbol of freedom and liberty. What better subliminal message to include on a stock you're trying to peddle? 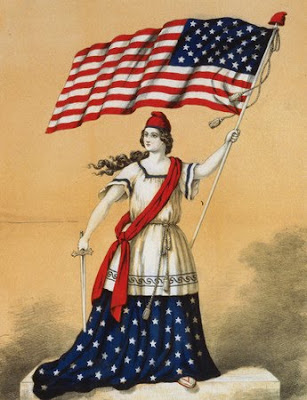 Allegorical Lady Liberty wearing a Phrygian cap
with Sword and Liberty Pole also bearing a Phrygian cap
And those strange looking hats? They're phrygian caps, whose use as a symbol of freedom and the pursuit of liberty dates back to the Roman Empire. Perhaps most infamously they were worn by the san-culottes during the French Revolution -- and anyone else wishing to keep their head, literally!
And as the patriotic picture above attests, use of the phrygian, or more often called liberty cap, has a long tradition of use in the United States. On coins, think Walking Liberty half dollars; on seals, think US Senate or the US Army; on flags, think WV, NY, NJ. And in the form of a Liberty Pole, like the one appearing in the picture above, liberty caps have appeared on stamps too. 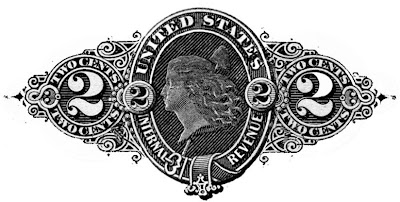 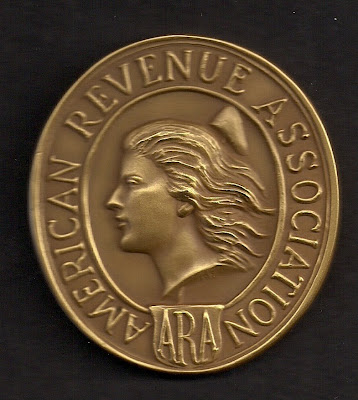 American Revenue Association Exhibition Medal
When Professional Sculptor and ARA member Domenico Facci offered to design an Exhibition Medal for the American Revenue Association, where did he turn? To none other than Lady Liberty as depicted on the Revenue Stamped Stamped Paper of 1898.
As radio news commentator Paul Harvey so famously would say, "Now you know the rest of the story."