On Beyond Holcombe: The Keeley Institute

As an introduction to this series, and a follow-up to Frank Sente’s posting on March 30, 2011, which references “Keeley’s Cure,” the Keeley Institute and the Keeley Company warrant discussion. Leslie E. Keeley was born either in 1832 or 1836 (depending on the source of information), in St. Lawrence County, part of the far northern reaches of New York State. He graduated from Rush Medical College in Chicago as a physician about 1863 or 1864. After the end of the Civil War, he moved to Dwight, IL, claimed to have invented an injection containing bichloride of gold which cured alcoholism and drug addiction, and opened a sanitarium there in 1880, together with his partners John R. Oughton, a chemist and co-inventor, and Curtis J. Judd, a wealthy merchant (whose other land speculation investments led to at least one precedent setting legal decision concerning settling a suit against one defendant while retaining the right to sue another). 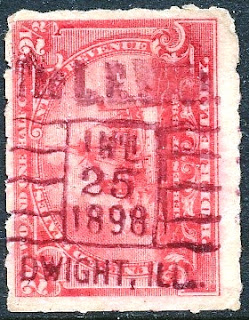 Keeley handstamp
In 1890, as a far-sighted entrepreneur, Keeley began to franchise his sanitarium and cure operation, and an ad for the Keeley Institute, published in Scribner’s Magazine in 1911, lists twenty-three different sanitarium locations, all operating under the name of the Keeley Institute, where the treatment regime of four shots a day could be administered. Some sources claim that at its greatest extent there were as many as 200 different branches of the Institute in the United States and Europe and that 300,000 people had been treated by 1900. This assertion seems supported at least in part by various references to Keeley Institutes existing in other cities not listed in the ad. For example, a Nevada website mentions two branches in Reno and Carson City while the Fargo, ND website, which Frank Sente cross-references, shows a picture of the local branch, and a Ypsilanti, Michigan website references another local Keeley Institute.

The significant question of whether the Keeley Cure actually did any good is highly debatable. While Keeley certainly became a millionaire through advocacy of his Cure, current thinking does support his approach to addiction as a disease rather than the Victorian view that it was a moral lapse. His claim: “Drunkenness is a disease and I can cure it” must be regarded as a major departure in the thinking about addiction treatment. In addition, the prestigious American Medical Association never flatly contradicted Keeley’s claims as it did with so many other quack medicines. That the AMA did not denounce the Keeley Cure might be because it was able to boast a fifty percent cure rate, according to one source, perhaps because of the group solidarity inspired by taking the cure at a sanitarium, an approach later incorporated into the Alcoholics Anonymous methodology.

On the other hand, Keeley appears to have persistently misrepresented the formula for his Cure. Chemical analysis of his formula revealed a base of more than twenty-five percent alcohol mixed with a variety of substances (some poisonous like strychnine) but no gold as claimed. Modern scientific method has never demonstrated the curative power of bichloride of gold, and treating alcoholics with alcohol has never been considered a legitimate form of treatment. By the middle of the 20th Century, alcoholism and drug addiction were regarded as mental diseases more than physical diseases and the approach of taking shots that would physically effect a cure was outmoded. (Only a prominent television figure now appears to advocate that addiction can be conquered without complete abstention from the addictive substance.)

After Keeley’s death in 1900, his partner John Oughton, continued to operate the Keeley Institute until his death in 1925, when Oughton’s son took over the business. While the popularity of the Keeley Cure slowly diminished without Keeley’s dynamic pronouncements, the last Keeley Institute did not close until 1965, whereupon Oughton’s grandson turned the main sanitarium building in Dwight, IL into a restaurant. The other buildings in that sanitarium complex have been preserved and are currently utilized by both public and private tenants. Other Institute buildings in various locations have been similarly re-cycled for present use.

Frank Sente made the comment that the holder of his featured stock certificates dating from 1901 and 1902 might have gotten “snakebit” by his investment.  Yet in 1901 or 1902, the Keeley Cure was still good business, and as long as the investor did not hold them indefinitely, he probably made a profit. Even after the Pure Food and Drug Act of 1906, the Keeley Cure itself died a slow and natural death over the subsequent sixty years.
Posted by John Langlois at 6:00 AM