Editors Note: Malcolm A. Goldstein is a new contributing blogger for 1898 Revenues. This post provides an introduction to his column on the companies that used proprietary battleships.  The complete text of this post is archived as a feature page.  The link to that page can be found in the far right column.  Below is the same text:


An examination of the companies producing the countless variety of cancels appearing on the battleship series of proprietary revenue stamps offers a fresh opportunity to explore the contradictions of a complex American society, where the fortunes of men, eventually exposed as among the most ruthless of the “robber barons,” were molded into the benevolence of philanthropic organization that today bear their names. In sanctioning battleship revenues to evidence payment of tax imposed to finance the Spanish-American War, Congress elected to tax patent medicines because they were profitable. The men who led the industry became unimaginably wealthy. As their histories unfold, strange and juicy tales emerge.

This story has been approached in two different ways. In the compilation Patent Medicine Tax Stamps, Henry Holcombe (1897-1973) created the definitive history of private die proprietary stamps and Prof. James Harvey Young (1915-2006), in his Toadstool Millionaires, recounted the social implications of the patent medicine era in American history. Yet, to a collector of battleship revenue cancels, while each book tells a unique and memorable story, it reveals only part of a vast and fascinating legacy of good and evil that patent medicines and the fortunes they created have bestowed upon society as their legacy. 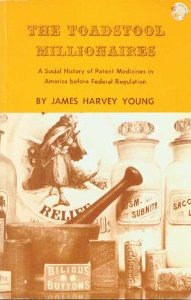 Holcombe’s book dealt with companies that ordered private dies. He was not recounting the history of patent medicines per se and ignored virtually all of those companies that did not place orders for their own stamps. The taxes on proprietary medicine and cosmetics had originated during the Civil War and lasted for more than twenty years until they finally expired in 1883. The great bulk of private die proprietary stamps date from that period. Between 1880 and 1898, the drug industry expanded enormously. During the Spanish-American War period, since printing procedures had changed and the tax was repealed entirely within four years (three years for patent medicines), very few companies had time to order their own stamps, so Holcombe’s book does not cover the younger group of companies. Young was not a philatelist, and did not mention revenue stamp cancels in his cautionary tale concerning the over-reaching, death-inducing claims the patent medicine proprietors often indulged and the sinister pressures they exerted to keep their industry flourishing. Proprietary battleship cancels provide a window through which to examine the companies that Holcombe did not feature (and perhaps to amplify upon some the companies he did), while Young’s social history of the era provides the context for re-examining the contributions as well as the excesses of the patent medicine industry.

1898 is an excellent year to examine the entire drug industry in the United States for it was then at the height of its influence and power. Taking the measure of the drug trade, in preparation for a meeting of the wholesale drug dealers association in New York City in October, 1894, a reporter for the New York Times wrote: “With the possible exception of the National Bankers’ Association, there is not another organization in the country that represents as much wealth in the aggregate as the druggists.” Yet, the industry’s decline was already foreshadowed, for by the end of the century, scientific inquisitiveness had developed tests allowing for clear and certain identification of the secret compounds contained in patent medicines. Within a few years after the end of the Spanish-American War, a series of exposes printed in McClure’s Magazine (gathered into the volume The Great American Fraud by Samuel Hopkins Adams (1871-1958)), instigated the first serious examination of the patent medicine industry’s excesses. These articles, in turn, led to the Pure Food and Drug Act of 1906. This Act made the first incursions on the industry’s outsized and unsubstantiated claims to positive cures. Nevertheless, the medical profession was still forced to relentlessly hammer for the next 30 years, with notice after notice to physicians (Nostrums & Quackery vols. 1-3: 1912, 1921 and 1936), before it successfully winnowed from the marketplace the blatant poisons, and strange decoctions (often featuring alcohol, but sometimes nothing more than plain water, as the undisclosed principal ingredient) which masqueraded as absolute cures for implacable diseases like cancer.

This column introduces a series of articles dedicated to re-examining the companies comprising the drug industry following the natural contours of the industry itself. That drug industry divides into three branches: 1) Manufacturers: 2) Wholesalers; 3) Retailers. These branches fought as often as they cooperated and the trail of lawsuits strewn in their wake is one previously unexplored source of insights into the nature of patent medicine company operations.

Philatelically, while it is not readily apparent, these divisions are subtly reflected in the cancels applied to the battleship proprietaries, and have influenced the present state of the cataloguing of proprietary battleship cancels. The re-categorizing proposed here will supplement the excellent existing cancel compilations. The Chappell-Joyce compilation - itself now in the process of revision through the columns of this blog - painstakingly focuses on the variety of printed cancels applied to these stamps. However, by constraining itself to printed cancels, it selects against important segments of the drug trade. On the other hand, the very exuberance of the listings in the Battleship Desk Reference book compiled by Robert Mustacich and Anthony Giacomelli, does not leave room for studied consideration of the nuances and variety of the histories while underlie the companies set forth in its exhaustive table. This study proposes to add anecdotal muscle to the articulate skeleton created by these two cancel compilations.

The center of the drug trade was the manufacturers. These companies produced their own goods and usually had their own networks of traveling salesmen, or “drummers,” to arrange for sales and distribution as well. Manufacturers had a natural wish to expedite the flow of their products and fairly quickly incorporated the entire collection of the tax into the process of packaging their products. The most creative manufacturers, who realized (as had their Civil War predecessors) the advertising value that government mandated stamps might add to their product, immediately placed their orders for the group of stamps that became the Spanish-American War addendum to the Scott RS list. Other large manufacturers, such as J.C. Ayer, Lydia Pinkham and C.I. Hood, created printed cancels to regularize the tax collection process. Ayer was an old enough company to have created RS stamps, and, had the new tax continued longer, might have done so again. The Pinkham and Hood companies, which made extensive use of printed cancels, became a manufacturing giants too late to have needed their own Civil War private dies, and thus were not included by Holcombe. Lydia Pinkham has accounted for several books in her own right, but her story is not widely told in philatelic circles. While the Pinkham and Hood cancels are common and well known to battleship revenue collectors (and are found in the Chappell-Joyce listings), the stories of these companies also legitimately fall within the ambit of the new study proposed here. 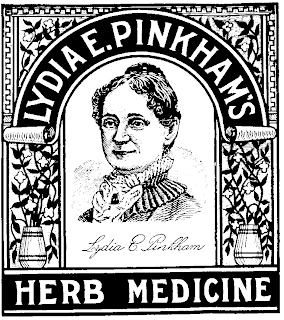 However, there are a great many more large or influential manufacturers within the drug trade itself who relied solely on hand stamped cancels. The proprietors of these companies, some later as notorious as William Radam and Frank Cheney, and others as diverse as W.W. Gavitt, Frederick Stearns and Leslie Keeley, relied on hand stamped cancels. This study proposes to recount their stories which are as varied and interesting as any set forth in Holcombe.

Wholesale druggists tended to supply their local regional druggists, although some of them competed on a national level. The largest, like Charles Marchand, actually did produce RS stamps during the Spanish-American War period. Others, like E. Ferrett of New York, who distributed the Wright product line, opted for printed cancels. Many prominent companies, like Meyer Brothers of St. Louis and George C. Goodwin of Boston, however, stuck with hand stamped cancels, and have not been scrutinized as carefully as the others. For example, Meyer Brothers catalogues provide much information about the state of the drug business at the turn of the Twentieth Century.

Retailers tended to have a single location or a group of locations around a single city, although there were a few regional affiliations and even the first, faint stirring of a national chain. They mainly had to account for tax to be paid on pro¬ducts already in stock on the effective date of collection, July 1, 1898, or had to stamp small batches of their own generic or home-brewed products or other miscellaneous goods. For this reason, most retail cancels appear on low denominations and are virtually all hand stamped. They remain largely obscure and are most often identified only if the entire name is given or the location is identified. Armed with that information, it is generally easy to match the cancel to known drug industry outlets. While most were small town druggists, the stories of retailers as varied as R.H. Macy (a large enough operation to have invested in printed cancels), J.N. Adams, and L.O. Gale, form the tributary streams of information which ultimately lead to the vast, still largely unexplored, ocean of patent medicine knowledge.

This ocean of knowledge exists on the same Internet which makes this blog available, for just as it has made the archives of the New York Times readily researchable and readable, it has made reachable, through scanning, obscure local histories, numerous dusty trade publications and other source material such as patent medicine company catalogues. In addition to these reproductions of older written materials, websites promoting study of family genealogies, and local points of interest, as well as hobby websites in neighboring fields like bottle and postcard collecting, have also contributed to widen the field of inquiry into patent medicines. This article argues that we should all take another plunge into the vastly improved ocean of knowledge.
Posted by John Langlois at 6:00 AM