General trade practice at the end of the 19th Century held that stock could be transferred in three ways. The War Revenue Law of 1898 describes the three modes of transfer in detail and specifies how the $.02/$100 stock resale tax was to be paid in each instance. In stark contrast the Law otherwise is particularly mum on how the the $.05/$100 tax on original stock issues was to be paid. Students of the War Revenue Law are often frustrated by its cloudy definitions and sometimes ambiguous language. But that's a subject for another blog.

According to the Law, if the "...evidence of transfer is shown only on the books of the company the (tax) stamp shall be placed on such books." If, as was the case with The Katy railroad stock we previously discussed, "...the change of ownership is by transfer (of the stock) certificate the stamp shall be placed on the certificate." Finally, "...in cases of an agreement to sell or where the transfer is by delivery of the certificate assigned in blank there shall be made and delivered by the seller to the buyer a bill or memorandum of such sale, to which the stamp shall be affixed." The Law goes on to detail the information required to be included. 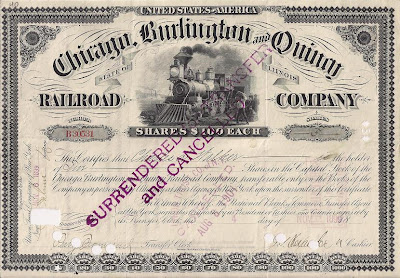 Issued to Charles L. Walker, not by the Burlington railroad itself, but rather through The National Bank of Commerce in New York, the original issue tax would have been 25-cents; 5-cents per each $100 in value or fraction thereof. As the 25 cent original issue tax obviously wasn't affixed to the certificate, it presumably was paid on the books of the company as maintained by the bank; although no mention of exactly how the original issue tax was to be paid appears in the War Revenue Law.

Not only was the stock issued through the National Bank of Commerce, it's also signed by one of the Bank's Cashiers, J.S. Alexander (lower right), and the Bank's Transfer Clerk, Perry Townsend (lower left). As we'll see below, Mr. Townsend played a prominent role in the stock's subsequent transfer. 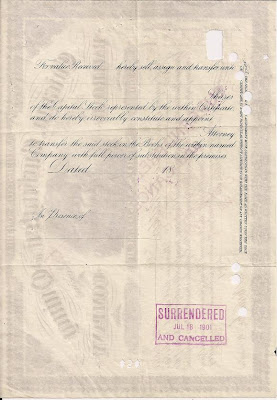 Note the preprinted form for transferring the stock has been left blank. As such its transfer, if otherwise not done on the books of the company, necessitated a separate memorandum of sale. 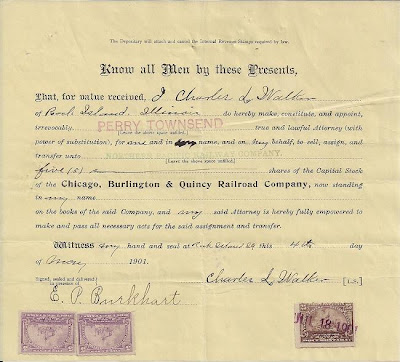 Memorandum of Sale
Signed by Charles L. Walker
May 4, 1901

But this is no general memorandum of sale, and the seller, Charles L. Walker didn't initiate it, nor was the transfer attorney a disinterested functionary. No, this stock sale was linked to a serious financial crisis that led to the Panic of 1901, Wall Street's first crash. Mr. Walker was most fortunate to sell this stock on May 4, 1901 as The Panic started May 17, 1901, less than two weeks later.

Essentially this memorandum was a offer to buy Charles Walker's Burlington stock tendered by the Northern Pacific Railway Company, listed on the memorandum as the buyer, through Perry Townsend, the National Bank of Commerce Transfer Agent. Ah, if paper could talk what a tale this memorandum might spew!

We're all too familar with the dot.com and housing bubbles of the 21st Century; this early 20th Century bubble was driven by speculation in railroad stocks. And it was the Burlington's stock that started the market decline that day.

And Mr. Walker? According to some sources he may have gotten as much as $200 per share for his five shares, double what he paid for them. All this has me wondering if I should be filling my gas tanks tomarrow, or if I should stay home instead and buy oil stocks.
Posted by Frank Sente at 3:14 AM