To date only one 1898Revenues blog has referenced the Portrait Issues of 1899. It featured a $125,000 stock certificate for The Baldwin (Piano) Company submitted by Tim Kohler. It's such a great certificate with examples of the $5 and $10 gray overprinted Commerce issues of 1900 in addition to the $100 John Marshall Portrait stamp, we're picturing it again below to introduce the subject of high value stocks. For more details about it, read the original August 17, 2010 blog. 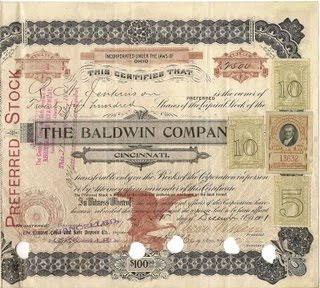 As their availability at the beginning of the 1898 tax era wasn't deemed crucial, and usage was projected to be limited, the bi-colored $100, $500, and $1,000 Portraits weren't introduced until 1899 when the print demands on the BEP were diminished from the initial requirements placed upon them by passage of the War Revenue Law.

Most were used on high value stocks, but they also can be found on other highly taxed documents like conveyances of valuable property and mortgages underlying bond offerings. As we suspect extant examples are rather scarce we plan to conduct a census of on-document usages as we did for on-document usages of the 1/2 cent Orange documentary stamp. 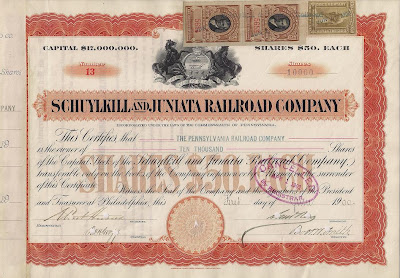 Properly taxed $250 with two $100 Portrait issues and a single R178 $50 Commerce Issue, the stock was issued to The Pennsylvania Railroad Company (PRR). Actually, The Schuylkill and Juniata Railroad Company was formed June 1, 1900 from the consolidation of five subsidiaries of the Pennsylvania Railroad. The predecessor component railroads were the Pennsylvania Schuylkill Valley; the Nescopec; North and West Branch; the Sunbury, Hazleton and Wilkes Barre; and the Sunbury and Lewistown. These lines all served the Coal Region of northeastern Pennsylvania. The company was absorbed into the PRR in 1902. 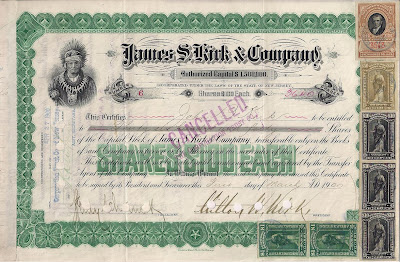 Properly taxed $182 with a single $100 John Marshall Portrait stamp, one $50, three $10, and two $1 Commerce stamps, the certificate was issued to James B. Kirk, Evanston, presumably a relative of the founder James S. Kirk. A third James, James A. Kirk, a son of James S. was president of the company at this time. Although the firm was located in Chicago, it was incorporated in New Jersey and this stock was issued through the firm's transfer agent, the Corportation Trust Company of New Jersey.

Originally founded in Utica, New York in 1839, James S. Kirk moved his soap manufacturing company to Chicago in 1859 where it competed with Proctor and Gamble who would eventually buy out Kirk's ancestors in the 1930s. The company however is again in business as Kirk's Natural Products Corporation.

Bob Patetta again has provided a most interesting usage example for the $100 Portrait Issue. 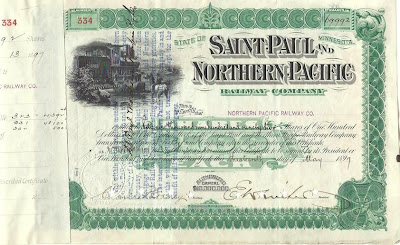 Had the original issue taken place during the War Tax era the tax would have been a whopping $3,499.60! Even the .02/$100 tax on its transfer, which did occur during the War Tax period, amounted to $1,399.84. The colorful payment, shown below consists of 13 $100 R179 John Marshall Portrait Issues including two full strips of four of that issue. (We discuss how these stamps were issued in a future blog). The payment also includes one R178 $50 Commerce; four R188 $10 gray overprinted Commerce; one R175 $5 Commerce; four $1 gray overprinted Commerce, plus the following battleship stamps: one 1-cent, four 2-cent, one 25-cent, and one 50-cent. 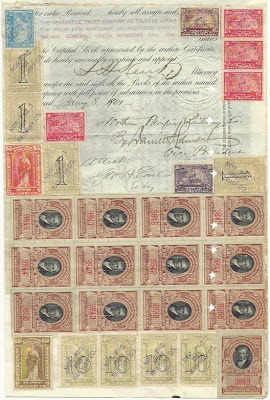 Again, we are conducting a on-document usage census of ALL three Portrait stamps, the $100, $500, and $1,000 issues. If you have other on-documnet examples please send scans of the entire document to 1898revenues@gmail.com
Posted by Frank Sente at 1:00 PM