Dave Thompson has sent a recent barrage of interesting material to post on the site.  The most interesting is a check made out to a prominent maker of proprietary medicines, Gilbert Brothers & Company, based in Baltimore.

Check front from November 22, 1899.
The front of the check is unremarkable, though there might be an interesting story if I could make out the signature.  Whatever the case, the reverse side of the check is the special part:

R162 block of 4 to make up 2 cent check tax
Bob Hohertz, a co-blogger at this site, is an expert on checks of this period and beyond.  I would want to know what he could tell us about how scarce this usage might be.  Any help Bob? 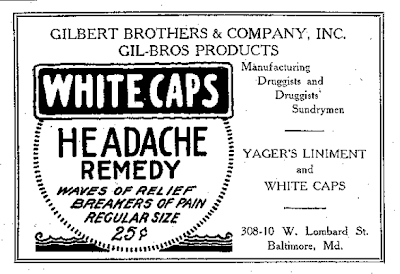 Gilbert Brothers advertisement
At the time of the cancel above, the firm was located at 9 North Howard Street in Baltimore before moving to Lombard Street in 1913, as in the advertisement immediately above.  The company made a line of products named for someone named Yager, including Yager's Sarsaparilla, which was one it most popular products.
Perhaps Malcolm might uncover an interesting story about this firm in a future On Beyond Holcombe post.
Posted by John Langlois at 10:23 PM