Frank Sente and I have been discussing the presence of adhesive stamps on checks or drafts already containing an imprinted revenue. Frank maintains that any check endorsed over to a third party before being cashed was subject to a second taxation at that time. This is based on an interpretation of the law, which reads, "Bank check, draft, or certificate of deposit not drawing interest, or order for the payment of any sum of money, drawn upon or issued by any bank, trust company, or any person or persons, companies, or corporations at sight or on demand, two cents," to require additional taxation each time there is such an order pertaining to a given document. This is plausible, but I have not been able to locate any decision or ruling by the IRS to that effect, while one would think there would be enough confusion on this issue to warrant one.

If any action other than simply cashing a check at the appropriate bank technically required taxation at the point of transfer, it stands to reason that either the requirement was being ignored in most instances, or the public simply did not know about it. However, we do find occasional checks with both an imprinted and an adhesive revenue, and it might be instructive to look at some of these.
The first example is a textbook case. Frank recently traded it to me, but it is best described in his words. "Here is a third party RN-X7 check with an R 164 added for the third party transfer. I call it 'Mrs. Cowles Goes to Washington.'

"Apparently Cowles Brothers writes a check dated September 14, 1899 to Mrs. C.D. Cowles so she has money for an excursion to Washington D.C.
"When in Washington on September 29 Mrs. Cowles presents the check for payment at the West End National Bank.

"The Bank required her to endorse the check so that it becomes payable to them (gives them recourse if a problem arises.) That technical third party transfer of funds via the check makes it taxable once again. Hence the added R 164.
"I'm sure the West End Bank made Mrs. Cowles pay the two cents. 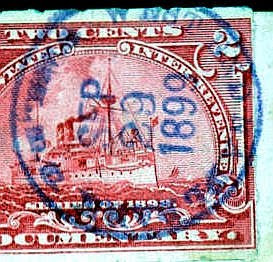 "NOTE: The date info in the bank's handstamp cancel is ALL inverted so the circular wording 'WEST END NAT'L BANK/Washington D.C.' appears inverted. It's a bit blurred, but readable." (Scan enhanced to bring out the cancel - with a rather garish result.)
Frank goes on to mention that the Cowles Brothers firm was an insurance company (agent or broker?) in Statesville, NC.
*****
Not all additional adhesive stamps appear to have been applied for such a clear reason. For instance, the check below was cashed at the National Bank of Commerce in Kansas City rather than the State Bank of Narka, and it was endorsed by J.C. Dale at the time it was cashed. However, the additional stamp bears the initials of the writer, H.M. Hatch, rather than those of J.C. Dale. First, does the fact that it was cashed at a bank other than the one in which the writer had an account cause it to be considered a new "order to pay" and require an additional stamp? Second, it appears that Mr. Hatch simply did not recognize the imprint as paying the tax, so he added the adhesive when he wrote the check. Perhaps this is a case of two wrongs making a right? Or is it as it appears, an unnecessary payment? 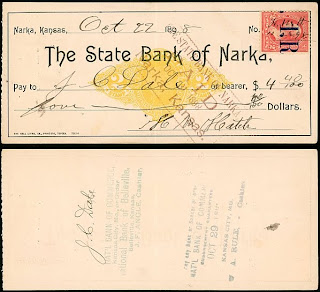 The check below is similar. It was written by W.H. Wallace to R.F. Hennig, who then endorsed it over to D. Deutsch, who cashed it at the Sullivan County National Bank in Liberty, NY. It appears that it might have required two additional two-cent stamps, but it only has one, and that one is initialed by Mr. Wallace rather than either of the endorsers or the Sullivan County National Bank. 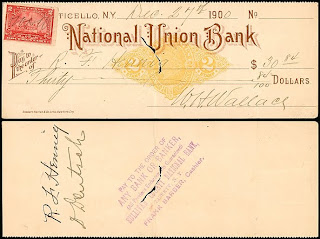 Frank has a theory which would account for the stamp being added by Mr. Wallace. "Perhaps from prior contact Wallace knew that Henning didn't have a bank account and thus would be unable to personally cash the check unless he presented it to the National Union Bank in Monticello. The check was cashed by Deutsch in Liberty, NY, fifteen miles away. If Hennig perhaps also lived in Liberty, could not have Henning sent him the check (rather than risk cash) by mail and, knowing that Henning would have to make it payable to a third party to cash it, have added, in advance, as a courtesy, an additional stamp to cover that situation? Considering that it appears to indeed by a third party check makes that scenario all the more plausible, at least to me."
An equally plausible scenario might be Henning, not used to having imprinted checks as early as October of 1898, simply put a stamp on it out of habit.
This third example was endorsed by the payee, James Glen, to be paid through the Continental National Bank, Chicago Clearing House on December 7, 1898, but the additional stamp was applied by the writer, David Baker, on December 3. Not only that, but the check specifies that it is payable through the Chicago Clearing House, so it isn't at all clear that there was a second "order to pay" involved. The additional stamp was likely added in error. 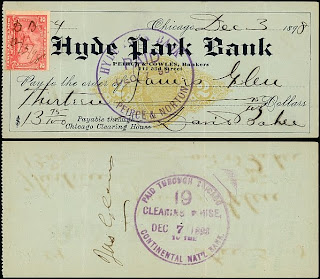 At the other end of the spectrum we find the check below with an endorsement rather like that on the Cowles check, but no additional stamp. It was written on Nelson L. Robinson's account in the National City Bank, payable to T. Milton Taylor, Esq. Taylor apparently cashed it at the First National Bank, giving it a specific endorsement, "Pay to the order of First National Bank." There is no extra stamp to pay a tax on this order to pay.
There is one difference between the Cowles check and any of these others. The endorsement on the Cowles check was specifically guaranteed by the bank. Could that have caused it to be a taxable event in some way that does not apply to these other third party checks? 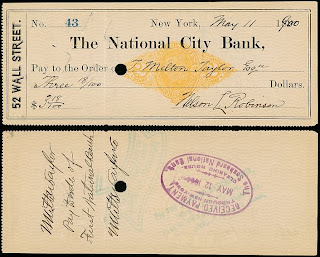 In a similar instance, Joseph Shaw wrote a check to W.S. Mead, who then endorsed it over to Studebaker Brothers. Admittedly, it was not endorsed in favor of a bank, so perhaps nobody thought about any additional tax. And the endorsement was not guaranteed by a bank. 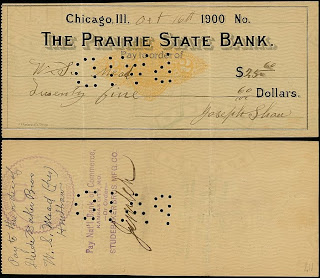 I have far more imprinted checks involving an endorsement to a third party in my collection which do not bear an additional stamp than ones which do. In several subsequent posts I'll show a few more with and without in the hope they will shed some light on the matter.
It is not at all clear that the simple act of cashing a check at a bank other than the one on which it was drawn created a taxable event. An endorsement such as Mrs. Cowles made to a particular bank, who then guaranteed it, may have done that, but I would still like to see an IRS opinion on the subject. How could it have been so clear at the time and so puzzling now?
To be continued.
Posted by Bob H. at 6:00 AM