An Unusual Bill of Lading

Next to bank checks and sight drafts, bills of lading are perhaps the most commonly available documents from the Spanish American War tax era. Like the one pictured in this prior blog, almost all just bear a single 1-cent stamp as the tax on domestic shipments within the United States requiring a bill of lading was a flat one-cent. Size, weight, and the number of items shipped didn't matter; shipments to a single destination, be it a small parcel, a trainload of coal, or a herd of horses, were taxed a flat one-cent.
Sometimes one will encounter a bill of lading for multiple shipments to different locations. They usually will bear individual 1-cent stamps, one for each shipment destination. I've seen a few examples where 2-cent or 5-cent battleship stamps were used to pay the tax on multiple shipment documented on a single bill of lading, but never one like the American Express bill of lading shown below bearing $6.61 in tax including $1 and $5 Commerce Issue stamps! 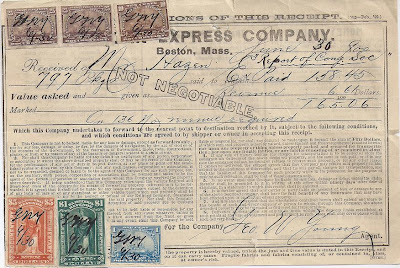 American Express Company Bill of Lading
Boston, Massachusetts
June 30, 1900
Tim Kohler scan
The bill indicates 797 packages were consigned and it further specified that, "On 136 no revenue required." So in 136 instances packages were sent to destinations that duplicated the destinations of the 661 packages that each were subject to the one-cent tax; i.e. 767 packages were being shipped to 661 separate destinations.

The $6.61 cent tax was paid by the $1 and $5 stamps already mentioned plus two 25-cent, one 10-cent, and one 1-cent battleship revenues. All of the stamps were initialled GWY and date 6/30 by Geo. W. Young, the American Express agent accepting the packages. It's an impressive and uncommon bill of lading and thanks go to Tim Kohler for sharing it. Can anyone else show bills of lading bearing any of the dollar value Commerce Issues?
The document offered a couple of tantalizing clues, and while I can't be absolutely sure, pursuing them via basic Internet searches leads me to the following explanation. 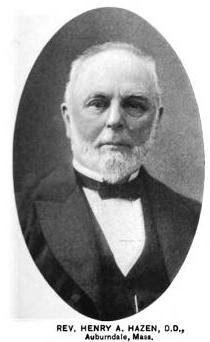 The "Mr. Hazen" listed as the consignor of the packages most likely was the Reverend Henry Allen Hazen of Auburndale, Massachusetts. Rev. Hazen was a well-respected Congegationalist minister in New England, who also was very active in the National Council of Congegrational Churches of the United States. In 1899 he served as Secretary to the Second International Council of Congregational Churches held September 20-29 in Boston's Tremont Temple.

While not the primary editor, as Council Secretary and Publishing Committee member, it most likely was Hazen who sheparded the production of the published report of the International Council's Proceedings. A digitized version of that 566-page volume is available here. And those 797 packages consigned to American Express identified on the bill of lading as, "Report of Cong. Soc." most likely each contained a copy of this volume.

Nine months, the time from when the Council met in September 1899 to June 1900 seems like a long time to produce a report, but the preface contains this apology, "Any apparent delay in its issue is, we believe, fully compensated for by the greater accuracy which, we hope, will be found to have been attained." And the online digitized copy, from the Harvard College Library, is pen dated 20 June, 1900; no doubt hand-delivered on that date. 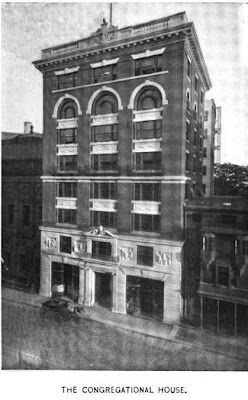