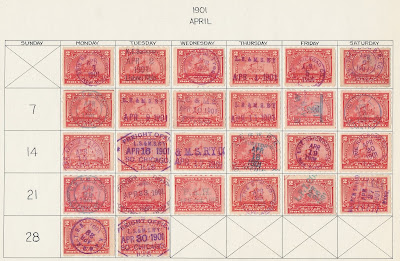 April 1901 page from a 2 Cent Battleship Calendar.  The calendar, purchased in the Tolman sale a few years back, is virtually complete Monday thru Saturday for the tax period July 1, 1898 to June 30, 1901 with 2 cent documentary battleship stamps, cancelled primarily by railroads.  The entire calendar may be viewed by clicking on the calendar in the right hand column of this site.
*****
I've been studying these cancels for several years now.  And slowly I've been decoding the origin of most of the cancels.  Most of the initials ending RR or RY are somewhat simple to sort out with the vigourous application of Google.  But some of the cancels defy easy identification, especially those of the initials of railroad auditors or other officials.  And there are many of those in the calendar like EWW and PAH, among others. These initials were picked because they exist in the calendar page featured above.
Many times I've wished I could pick up the phone and call the late Mr. Tolman, who could have quickly solved many of the mysteries in the calendar.  Instead, I searched through the employee records of railroads that are available online, in many cases with no success.  However, fate has intervened!
There is one other person in the world that operates a website dedicated to 1898 tax stamps:  Bob Mustacich.  Turns out that Mr. Tolman left behind records with battleship collector Tony Giacomelli.  And Mr. Giacomelli supplied those documents to Bob Mustacich.  In these case of this calendar, what are those records?  Bob Mustacich has photocopies of pages from Mr. Tolman's collection that includes stamps with identified cancels that nearly match many of the cancels in the calendar.  Mr. Tolman left a Rosetta Stone, just not one that was sold in the same lot as his calendar in the Siegel auction a few years ago.
Additionally, co-bloggers at this site have published posts that have led to initial identification.  Below is an illustration of one example from the calendar page above.  But the key to opening up the identification process has been Bob Mustacich's on-line publication of a Tolman's photocopied railroad cancel list.  You can find those on-line lists here.   Below is a small section from the D thru G section the list.  The first row includes a cancel with the intials EWW. 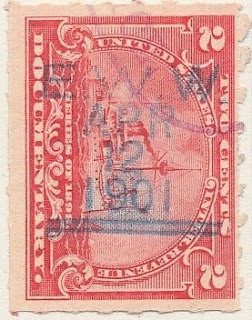 E. W. W.
APR
12
1901
This stamp comes from the April 12 slot on the calendar.  The EWW initials provided little clue as to their origin.  But the cancel is the same as that on the first line of the black and white cancel in the list above.  Henry Tolman identified the cancel as being the initials of E. W. Warrick, the Auditor of the Ohio River Railroad.  Stay tuned, I will highlight this cancel on April 12. 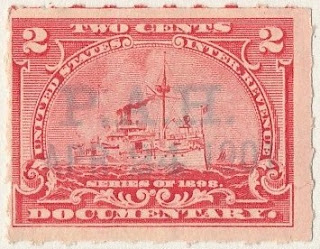 P. A. H.
APR  24  1901
From the Tolman list the initials PAH are also identified as coming from P. A. Hewitt, the Auditor of the Dayton & Union Railroad.  This stamp and the railroad will be included in a post on April 24.
*****
The stamp below involves a different story, but one that involves this website.  My fellow blogger Bob Hohertz wrote a post for this site this year on January 11, and published a scan of a check for the Live Poultry Transport Company.  The cancel on the stamp on the check included a clear set of LPT intials.  The cancel is identical to that on the stamp below: 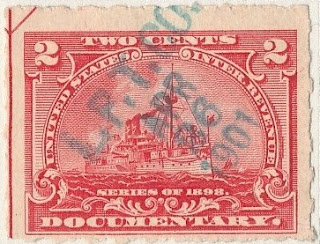 L.P.T. CO.
APR
26
1901
Cancel by the Live Poultry Transportation Company.
With the new advantage of the lists posted by Bob I am reviewing the calendar to identify additional inscrutable initials.  And maybe, by serendipity, other contributors to this site will post further clues to help solve the riddle of cancels like this: 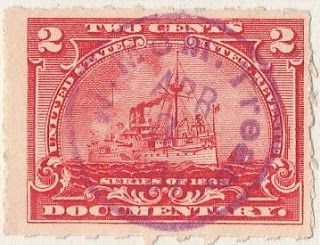