Another Congregational Church Bill of Lading

Another Congregational Church bill of lading has surfaced. Like the bill of lading previously shown on 1898Revenues, this one too was issued by the American Express Company in Boston on June 30, 1900. It refers to "Minutes of" rather than "Report of Cong. Church", but both likely were for shipment of copies of the Report of the Second International Council of the Congregational Churches. 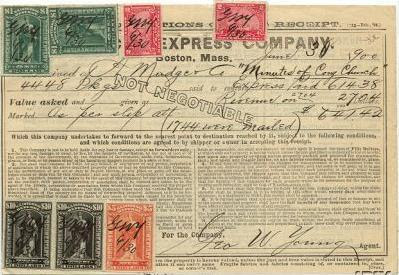 American Express Bill of Lading
Boston, Massachusetts
June 30, 1900
scan saved from eBay by Bob Patetta
Bob Patetta, who has provided us with numerous interesting documents, saved this scan from an October 2002 eBay auction. Unfortunately he was not the winning bidder so we don't know the current whereabouts of it, but thanks go to Bob who thoughtfully saved the image for future reference.
4,448 packages are listed, 1,744 of which presumably were turned over to the Post Office for mailing. The remaining 2,704 reports must have been shipped to different addressees as a total of $27.04 in tax was paid, 1-cent per each package to a different destination. The tax was paid by a combination of two $10, one $5, and two $1 Commerce Issues plus two 2-cent Battleship revenues.
These copies were consigned by A. Mudge & Co. More specifically, Alfred A. Mudge & Son Co., a well known Boston printer, although the Press of Samuel Usher is identified as the publisher in the report.
It's a great 1898 document and we'd like to know its current whereabouts. Hopefully, the owner is an 1898Revenues reader!
Posted by Frank Sente at 6:00 AM