We continue our review of high value stocks by considering ones bearing the $500 Alexander Hamilton Portrait Issue, Scott R180. I've always considered it to be the most attractive of the three portrait issues outshining the other two issues with its brillant red color.

Although I have a couple of R180 on-document usages, none are on stocks, so my thanks go to fellow collectors Bob Patetta, Mike Mahler, and Tim Kohler, each of whom have graciously provided material for prior blogs, for also providing the three R180 stock certificates shown today.

We are conducting a census of on-document usages for all three Portrait Issues, Scott R179, R180, and R181 so if readers either have, or know of, other examples of the $500 issue on-document, please contact us at 1898revenues@gmail.com.

Yesterday's blog about usages of the $100 issue brought news of three additional examples and, as all three of today's stocks also bear $100 stamps, the total number of stocks bearing $100 John Marshall stamps now stands at nine. 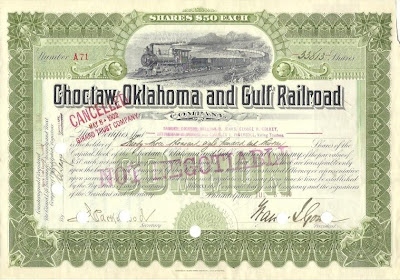 Samuel Dickson, William Jenks, George Colket, Effingham Morris, and Charles Ingersoll, Voting Trustees are listed jointly as owners. The certificate was cancelled when the company came under the control of the Chicago, Rock Island, and Pacific Railroad in May 1902. 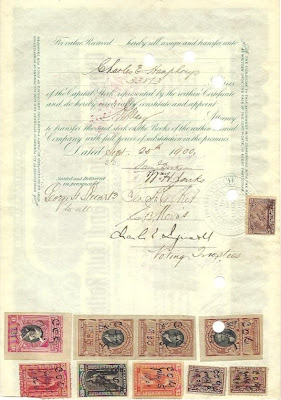 The $845.35 tax on the original sale was paid with one $500 Portrait Issue, three $100, one $30, one $10, and one $5 Commerce issues plus one 25-cent and one 10-cent Battleship stamps. An additional 25-cent Battleship pays the Power of Attorney tax for the September 25, 1900 transfer to Charles Hampreys. If that transfer did occur, the tax may have been paid, albeit improperly, via a separate memo or on the books of the company.

Mike Mahler provided a similar Choctaw, Oklahoma and Gulf certificate. This one curiously is dated May 6, 1902, the very day the CO &G was brought under the control of the Chicago, Rock Island and Pacific Railroad and just two days prior to its cancellation. The Watonga (Oklahoma) Construction Company is listed as the owner. There must be a good story here, but I'm not finding it. Anyone knowing the history of the CO & G is invited to contact us at 1898revenues@gmail.com 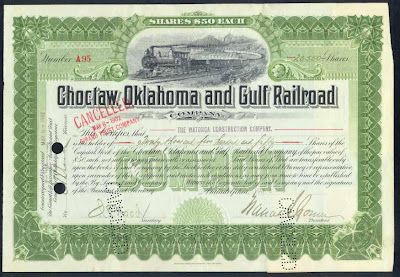 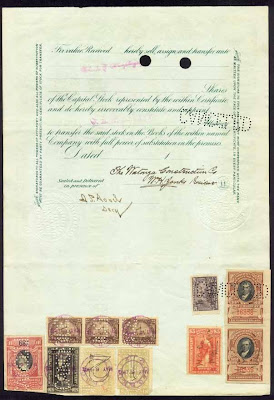 In this instance the original issue tax of $513.75 was paid, at left, with one $500 Portrait, one $10 Commerce, one $2 and one $1 gray overprinted Commerce, and three 25-cent Battleship stamps. The transfer tax of $205.50 was paid on the right side with two $100 Portrait, one $5 Commerce, and one 50-cent Battleship stamps. This certificate, too, was transferred to Charles E. Hamphreys via a Power of Attorney transaction, but the 25-cent tax POA tax appears not to have been paid.

Tim Kohler's Chicago and Eastern Illinois Railroad stock is the only one clearly showing all the proper taxes were paid. 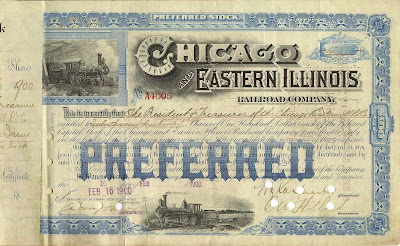 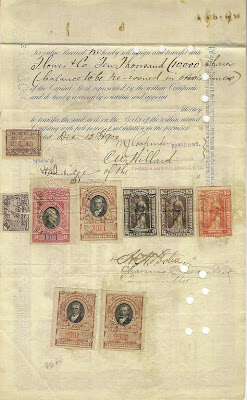 The 25-cent Battleship paying the Power of Attorney tax is the only issue to bear a handstamp: C. & E.I.R.R. CO./DEC 15/1900, obviously a variable date boxed dater cancel. It is tied to the document so it wasn't precancelled, but clearly must have been applied by some functionary other than those applying the other stamps.
Posted by Frank Sente at 9:25 PM